The travelling fencer problems. 10 Do’s and Dont's when you’re on the road as a fencer 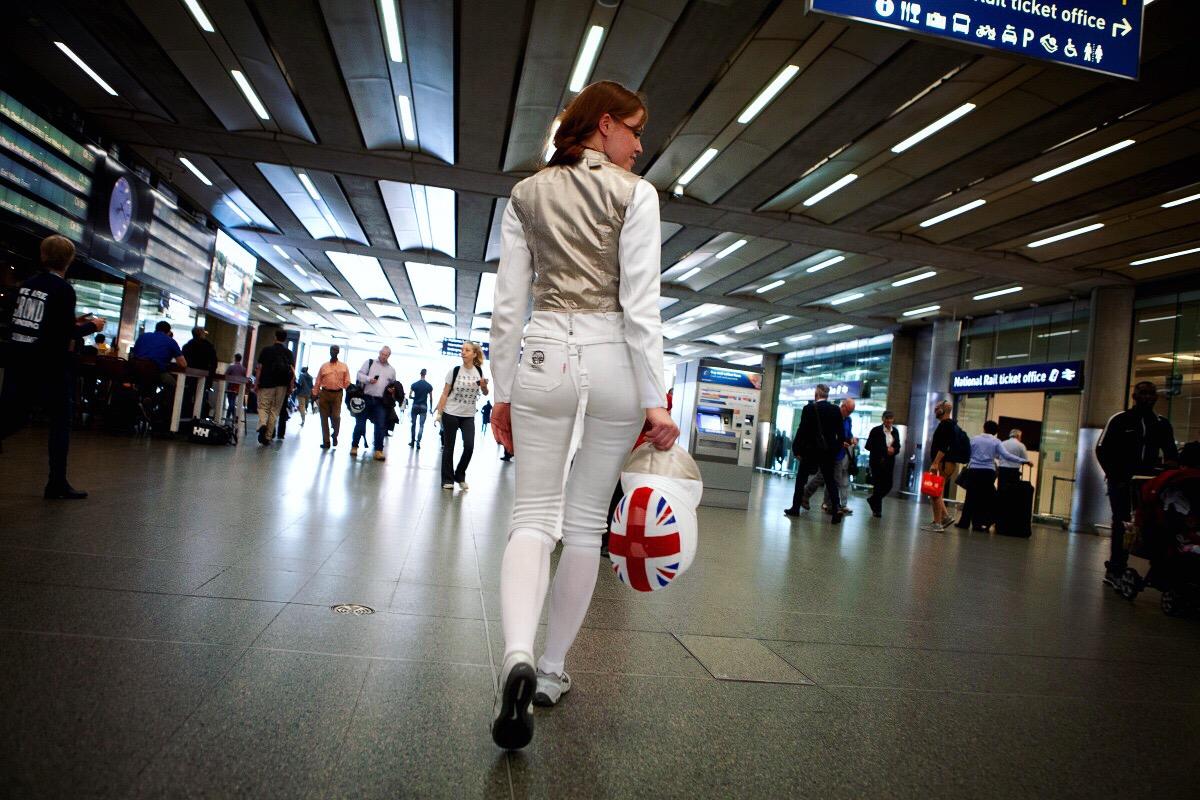 You might have heard about the so-called travelling salesman problem, which is one of the most studied conundrums amongst computer scientists, but here at Leon Paul we believe there is another problem out there that merits at least the same level attention, and that’s the problems you face when you’re on the go with your fencing kit. (If you've ever gotten into a fight before your actual fencing class with an opponent named “revolving doors”, you know what we’re talking about). So, based on the experience of our Instagram girl Johanna, we’ve collected 10 Do’s and Dont's for the travelling fencer. Warning – they might need to be taken with a pinch of salt ;)

The ten commandments of the travelling fencer

1. Learn to enjoy the spotlight

Bad news if you're shy and prefer a quiet life in the shadows of a training hall to having all eyes pointed at you: Travelling as a fencer might come with a certain amount of public attention. Whether it's because you're trotting around on the streets laden like a mule (handbag in one hand, laptop bag in the other, and rucksack bag like our free-roller on your shoulders, that's quite a lot - I'm talking from experience here!)  or due to the sheer size of your "luggage", how others will call it, - be prepared to not pass unnoticed.  You won't even need our biggest bag, the aptly named "Giant bag" for coaches equipment, to raise curiosity; the team bag, especially when used with the matching top bag, will do a pretty good job on that, too. (Again, I'm talking from experience).

No, for once, this is not about politeness or good manners. Choosing your words wisely can actually prevent you from some suspicious glances in public transport or other not-so-pleasant experiences that are only funny in retrospective. Whether it's discussing your tournament equipment on the Tube with a club mate ("I brought three weapons with me, but still need to fix two of them - what about you"?) or inadvertently uttering the keyword "weapons" at the bulky luggage counter at the airport, as a travelling fencer you should always be careful what to say out loud. (Unless of course you're keen on drawing the general attention when a bunch of airport security guys arrive to drag you and your fencing bag in some back office for a meticulous check of your "unloaded firearms", as the permit they'll finally hand you will say.  Happened exactly like that to a friend of mine.).

One of the funniest games out there in the non-fencing world is having people guess what's inside your disproportionate monster bag full of kit. Take ten people and enjoy twelve different answers... and the job descriptions that come with it. My personal "best of" - and I am not joking - include: musician ("what instrument do you keep in there?"), professional golf player and secret agent. (I suppose the latter had to do with the target sign featured in the Leon Paul logo, displayed quite prominently on the weapon top bags. But on the other hand, considered that Leon Paul has a history involving James Bond, in some way that guess is only fitting, isn't it? ;) )

What I've learned in years of travelling to training camps and competitions on trains with the nasty habit of only being punctual when you're super-late and secretly counting on some extra-minutes: never be in a hurry when you're on the road with your fencing bags. You'll inevitably end up catapulting every unsecured object in your vestibule to the ground when rushing out (the sudden narrowness of literally every kind of passage or corridor when you're carrying fencing equipment is a physical phenomenon that would merit to be scientifically studied), and even if you made it out of the house without leaving too many traces of your passage in the staircase (fencing bags love to rub themselves against staircase walls and to  leave aesthetically pleasant marks), you'll still have to face the omnipresent adversities of public spaces (namely doors and elevators - see also commandment no. 9)  that can transform your sprint to the train or bus station into an obstacle race against the time.

5. Know Thyself (And your needs in specific situations)

Every fencer (and especially every fencing parent, who at some point in their life desire to have their own sponsorship patch on their offspring's arm) knows that our sport comes with a lot of gear. But is the fact that you happily spent a month's rent on your fencing kit a reason to carry all of it to every training session? While it's certainly very comfortable to know that all your fencing stuff is in one place (this might help avoid emergency purchases at tournaments, but that's a different story...), unless you are among the lucky fencers to have a club locker, there are occasions in which you're simply better of with sorting your stuff. For a simple lesson with your coach, a small weapon bag and a hold-all will usually be more than enough. The combo that worked best for me: use the "transportable fencing closet with in-built shelves" (aka the team bag base, which you can place upright in a corner, just like an XS-wardrobe) for storage at home, and use another, smaller bag (the weapon carrier pro is a great option) for daily training, when you won't necessarily need your whole weapon collection (that's the cue for a guilty look towards my fifth epee...) or your testing equipment.

I've mentioned mules (no, not the shoes, for once) before, haven't I? Well, throughout my life as a fencer, this equine species has had my deepest sympathies more than once, when I was staggering under the heavy load of my fencing kit despite all my tries of decluttering my bags. So, again, if you're not among the lucky fencers with a club locker and/or a on the move a lot, investing in the right kit is an action that really pays off (your back will say thank you). Knowing that a lightweight fencing uniform at Leon Paul is 37% lighter than its standard counterpart (for an average women's size this means -700 grams for the jacket alone!), think about how much weight you can save. (So, if you ever needed an excuse to treat yourself to our high-performance Apex line, you've just found it).

As both women and men know (the former from first-hand experience, the latter from astonished observation) bags generally are mysterious objects: they can hold more stuff than you'd ever expect (emergency water bottles and books you last read in 2014, anyone?), but if you're looking for one item in particular it'll take ages to find it. And this frustrating tendency grows exponentially with the size of the bag. So, if you don't want to spend hours to get ready for training, order is key. Look out for a fencing bag with extra compartments and as many additional pockets as possible (the Leon Paul weapon carrier pro even has a compartment to keep fresh and used cloths separate!) in order to minimise the natural pull of chaos.

Associating the right travel companions is an art on its own, as you'll for sure agree if you've ever tried to travel with too many wheeled objects at a time. (For reference: No, a team bag and a wheeled suitcase are definitely not a good match). It may take some time to figure it out but find the combo that works best for you. My personal favourite when it comes to travelling with both your every-day clothes and your fencing kit? Use a small wheeled trolley for your everyday-clothes and a bag you can carry on your shoulder to stow your fencing kit. (The weapon carrier pro is perfect for that, but - my ultimate discovery - even the top bag that comes with the team bag fits a whole set of training kit, including mask and shoes!)

9. Don't let your guard down, ever

Doors closing a bit too fast to let pass both you and your equipment at a time, elevators so narrow that they barely fit your fencing bag, not to mention tube gates ... the enemy of the travelling fencer is everywhere. So, always be ready to pick up a fight against the objects of daily life. "En guarde" is a state of mind (and life), when you're on the road as a fencer. (In case you want to grant your beloved fencing bag some extra-protection when faced with these challenges: our flight cover will give it enough padding to withstand even the meanest adversaries).

10. Don't care what people think... and enjoy the journey

It may have transpired from the previous commandments: Travelling as a fencer can be a bumpy road paved with adversities and misunderstandings.  (Case in point: My neighbours have been thinking for years that I was "going on holiday again", when they spotted me wheeling my fencing bag down the hallway). But hey, just as new year resolutions, it all comes down to the way you look at it.  Just consider your travels with your fencing kit as a training before training, both at a physical and mental level (aren't dexterity and nerves of steel some of the prerequisites of any fencer?), and you might actually start to enjoy the journey.