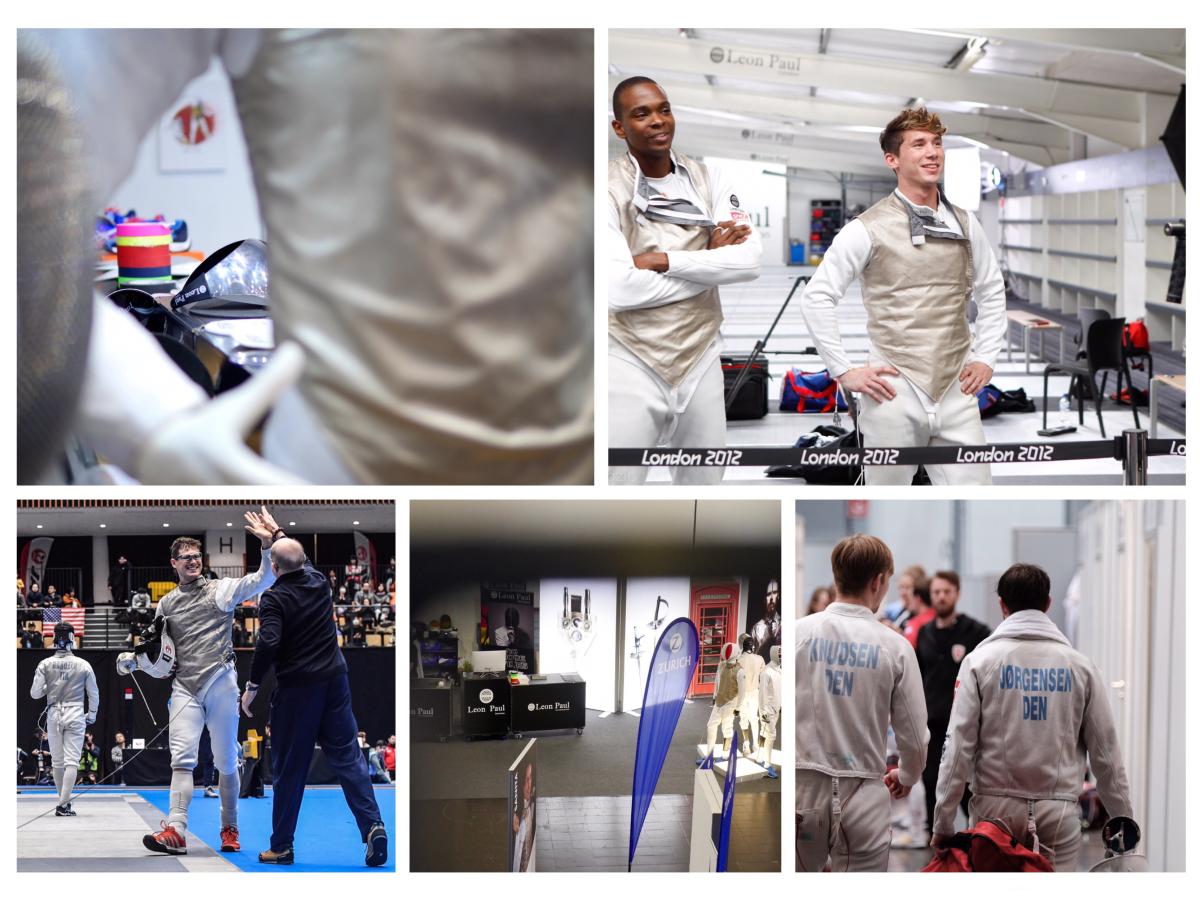 The month of September traditionally rings the "back to school bell" and marks the start of a new fencing season. In order to get back into the swing of things, we’ve put together our highlights of the past season for you. See it as our extra dose of motivation for the upcoming season and it’s undeniable highlight, the Tokyo 2020 Summer Olympics! ;)

The season getting the Olympic qualification going (the first qualifier for the Tokyo Olympics took place in April 2019) is always special, not only for the fencers themselves, but also for a fencing manufacturer like us who is always rooting for their amazing team of Leon Paul fencers. But the 2018/19 world cup season with its highlights in Dusseldorf and Budapest was definitely more than special for us and our athletes.

The proof in five moments:

At Leon Paul, we definitely have a special bond with Richard Kruse (after all, he’s the only fencer with formal permission by our director Ben Paul to stain the walls of the Leon Paul fencing centre. Oh, and did we mention that he shared his tips for taking proper care of your foil tips with us and our readers here?) So you can imagine how happy we were when, early in the season, Richard Kruse first became the 47th “Lion of Bonn” and, only a few weeks later, won the world cup in Tokyo which skyrocketed him to the pole position in the FIE ranking in men’s foil. A historical first that was not only covered by the UK media, but which we also celebrated with an Instagram post featuring one of our favourite shots of Richard and his coach Ziemek from ZWF fencing, who is also a regular in the Leon Paul fencing centre. Since January 2018 the cards were reshuffled a bit by other events of the world cup calendar, but Richard is still in the top 16 of the world and we wish him all the best for the qualification to the Tokyo Olympics.

2- Our booth at the Euros in Dusseldorf

There were two international events in the 2018/19 fencing season we knew we wanted to be a part of at the very moment they were confirmed: one was the highlight of the season, the worlds in Budapest (see below). The other was its not so little brother, the European Championships in Dusseldorf, Germany. After months of preparation we finally started to set up our booth in hall 8 of the Dusseldorf trade fair, which turned out to be an excellent and spacious venue for an international fencing event, on the 14th of June. And not just any booth, but one of the biggest booths in the history of Leon Paul and by far the biggest one our colleagues from Leon Paul Germany, who were in charge, had handled to date. It was probably the best looking too. Not for nothing, the LED panels on which some "larger than life" versions of our products and selected Leon Paul fencers were displayed, caught the eye of both visitors and fencers... as shown by the reactions on Instagram. At this event we really took advantage of the space at our disposal and experimented with a new LP stand format allowing people to move into the space and explore our products and the world of fencing in general. We wanted more than a traditional counter (we're not a fast food truck, after all!), and customer feedback only encouraged us to further explore this option!

Epee fencing may well be known to be a discipline full of surprises, there will always be the medal that really no one saw coming. And that was the case for the historic silver medal won by the Danish team (special mention to their spectacular anchor, Leon Paul fencer Patrick Jorgensen) in the men’s epee team competition in Dusseldorf. Ranked 10th before the competition, the Leon Paul sponsored Danish (the latest result of the collaboration is a video that went viral on our Facebook page) made their way to the final through victories over the Ukraine in the 8th and (at the time) current world champion Switzerland in the quarters. In the semi-finals, they clearly defeated the Estonian team, and then would face the Russian team in the final. The underdog against one of the traditional big players in fencing, talk about an unexpected pairing! And the match that followed was really a final to remember: while the Russians had always been in the lead, in the ninth and final leg an incredible Patrick Jorgensen scored point after point against his Russian opponent. When, in the last seconds of the regular time, Jorgensen managed to even the score, the audience went wild. Denmark may then have lost by one touch in sudden death, but in our hearts, along with the first medal at a European Championship for Denmark, they took the title for "best fighters" that day.

4 - Our booth at the worlds in Budapest

As mentioned above, we knew from the beginning that we wanted to be present with a sales booth at the World Championships in Budapest, the heart of one of the leading countries in fencing. It’s probably not for nothing that two of the current individual Olympic champions in fencing, among them Leon Paul fencer Emese Szász, are from Hungary. Not to mention that since 2017 there is also a Hungarian branch of Leon Paul, which, supported by none other than Emese herself, has managed to hold their own on the Hungarian market and to grow a community of true aficionados of all ages. We’re sure you know one of our biggest fans, rising star and current European and World Champion in Cadet Women’s Epee Eszter Muhari! … You've already got it: not going to Budapest was simply not an option. And so, there we were: in one of the hottest weeks of July 2019, bringing our new shop concept to the SYMA hall in Budapest. The Leon Paul booth was at the very centre fencing action being right next to the fencing pistes, and our team really enjoyed that position. We think the fencers and customers who used our space to hang out, to have a chat, and even to have a fencing lesson (!) did so, too :) And also in another way, that event definitely brought us luck. Not only because we witnessed some amazing matches (we’ll never forget the team gold medal match in men’s epee, which brought the 20th title for Leon Paul’s team France, and the historic first team gold medal ever for team USA with Alex Massialas), but also because it wrote one of the best pages in the Leon Paul history. One of those moments/matches you can’t plan but for which it needs a kind of magic…

5 - The "Leon Paul final" at the worlds in Budapest

Shhht, we tell you a secret: while we were following the final phase of the men’s foil competition in Budapest the possible encounter between Marcus Mepstead and Enzo Lefort was referred to as dream final by both our directors. Not only because the Brit training in the US at Brooklyn Fencing and the fashionable Frenchie (did you know he has an Instagram account dedicated to photography?) have been part of our team of Leon Paul fencers for years. But also, and mainly, because back in 2017, when we first introduced our wireless fencing system, we cast these very two fencers for the video promo accompanying that special product launch.
The video clip featured an unusually exciting one-hit match that started in the Leon Paul fencing centre, then went on in a wheat field,  a garage, a library… and then ended with a final hit by Marcus. And now, in 2019, we had the remake on the finals piste in the sports hall in Budapest. Truly a dream final, and well in line with what the official slogan of the Budapest worlds “a kind of magic” had promised. The rematch ended as most of you will remember, with a win by Enzo. The perfect ending to the story of the wireless video.

With all these events in mind, we’re really looking forward to the upcoming season… and (hopefully) more magic on the fencing pistes for us and our fencers.