The development of fencing kit 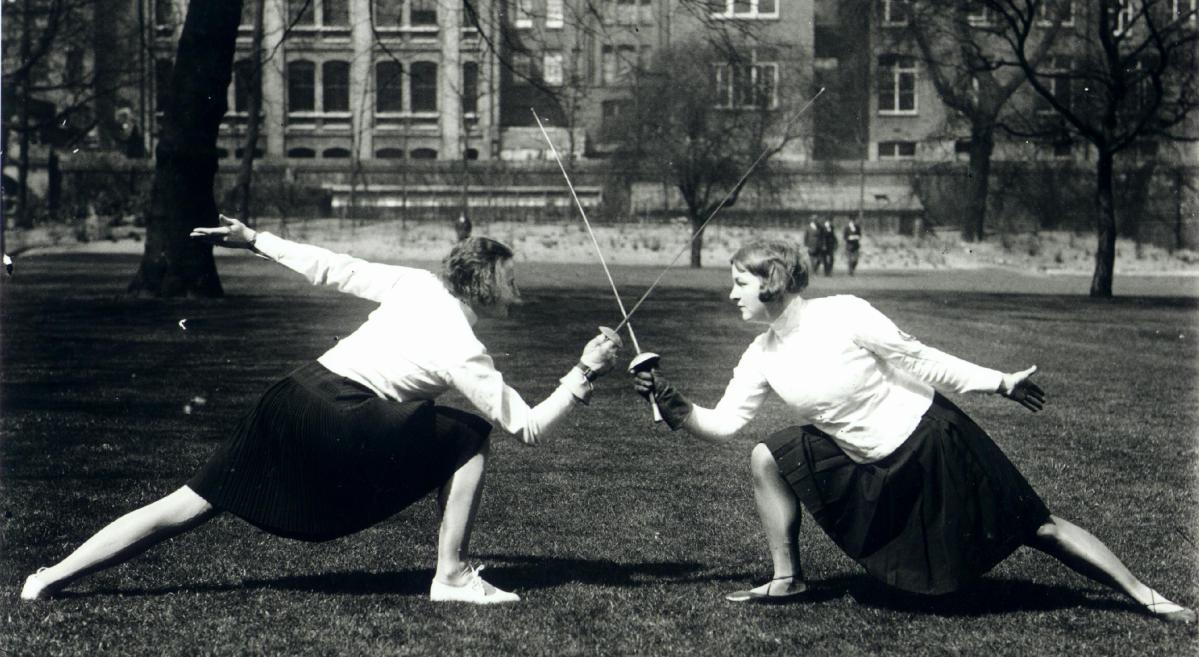 Fencing may well be a sport with a relatively strict dress code nowadays (although we're at Leon Paul always trying to bring colours back in the game), but in the past, fencing fashion has (almost) seen it all: open-toed sandals and heeled shoes for the gentlemen, skirts and corsets belts for the ladies... read on to discover the convoluted story of fencing kit, brought to you by our expert in fencing history Malcolm Fare (who has also published the history of epee, foil and sabre fencing here on this blog).

The development of fencing kit

Early printed books on fencing tend to show swordsmen either naked (to display the muscles used in various moves) or fashionably dressed, although examples of 16th century purpose-made padded fencing doublets used when handling the stiff-bladed practice rapiers of the time are known [Fig. 1]. 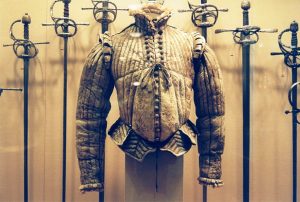 The appropriately named Philibert De La Touche[2] in 1670 was the first to illustrate a plastron lying next to some foils and there is a fine 1680 engraving of a fencing master wearing one [Fig. 3] in the Bibliotheque Nationale, Paris. 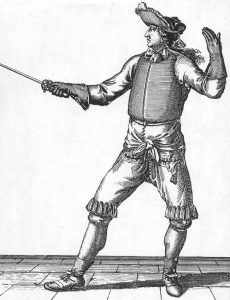 De La Touche was also the first to depict a specialist piece of fencing footwear: the open-toed sandal for the leading foot [Fig. 4]. 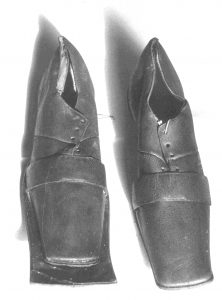 Believed to provide greater freedom of movement than an enclosed shoe, it had a sole projecting up to 75 mm beyond the toes and was used to make a resonant sound during the salute. Although the sandal had become enclosed by the 19th century, the strange practice of slightly extending the sole continued until the Second World War, by which time the projection was barely 5 mm yet noticeably different from the sandal on the other foot.

The first book to describe special fencing clothing was written by the 17th century amateur swordsman Sir William Hope[3]. He mentions the outfit worn in schools as a white waistcoat, breeches and stockings, sandals and a black velvet cap, adding that the ends of the waistcoat should be tucked into the breeches to make hits easier to see. This continued to be normal fencing dress during the 18th century, although the cap was replaced by a tricorn hat and Angelo[4] added a short jacket over the waistcoat. 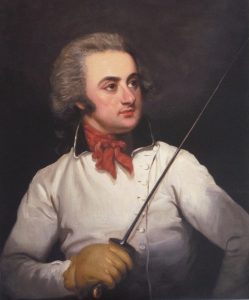 The classic side-buttoning fencing jacket appears to have been introduced by Henry Angelo, who is portrayed wearing one around 1790 in a painting in the National Portrait Gallery by the American artist Mather Brown [Fig. 5] and again in a print of 1791 by John Smith. In the 20th century, the politician and fencer Sir Oswald Mosley (runner-up in the 1932 British epee championship) modelled the black shirts of his fascist party on the fencing jacket [Fig. 6]. 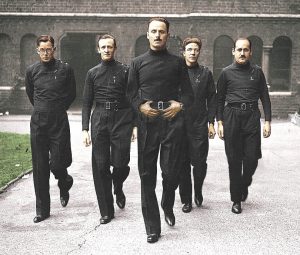 According to Brevet Major Henry Wayne of the US Army[5], by the mid-19th century a fencer's costume consisted of a loosely fitting jacket of brown linen with standing collar, buttoned on the left, the right side from elbow to the shoulder being faced with buckskin or other pliable leather; for those requiring more security, he recommended an over-plastron of soft leather on the outside and strong linen underneath, stuffed to the thickness of half an inch with hair and well quilted to keep it in place, fastened by straps and buckles around the neck, back and waist. The jacket was complemented by pantaloons, a black silk cravat, a wire mask with wings for the protection of the ears, a slipper for the left foot and a sandal for the right.
In 1861 George Chapman[6], seeing the punishment inflicted by military members of the London Fencing Club, of which he was secretary, recommended a stout leather jacket, a well padded glove and even a thigh pad for use against aggressive opponents.

By the 1880s, fencing had become fashionable for women and in 1885 the French fashion journal, L’Art et la Mode, illustrated the latest outfits for the well-dressed lady and gentleman fencer.  She wore a white patent leather embossed jerkin with red plush velvet sleeves, a broad red silk corset belt, Scottish skirt, red stockings and flat-heeled shoes; a red silk cravat enveloped the neck which received added protection from a bib attached to the mask [Fig. 7].

He wore an outfit of grey velvet with silver buttons fastening the jacket and trouser legs, a yellow leather belt, a glove with black patent leather gauntlet and grey leather boots, the right one having a projecting sole suitable for the appel [Fig. 8].

Lady Colin Campbell, one of the pioneers of women’s fencing, was said to wear breeches of black satin or vicuna and a loose silk shirt over a narrow corset belt with one bone at the back and front. A padded jacket of soft grey or dull black suede covered the shirt and black stockings and silver-buckled shoes completed this fashionable outfit. The best woman fencer at the turn of the 20th century, Toupie Lowther, wore an embroidered tunic-style jacket with white breeches [Fig. 9].

When epee fencing first became popular in England in 1900, gentlemen were expected to wear black fencing trousers or breeches with stockings, a white jacket, ordinary gloves, i.e. without gauntlet, and walking boots or shoes with heels [Fig. 10]. 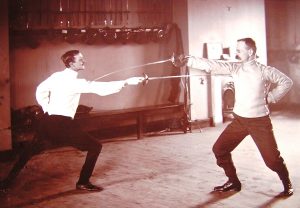 Jackets were initially made of white piqué, but this tended to be easily damaged by the pointe d’arret and was soon replaced by sailcloth. At the first international competition in which an English team took part – an epee match in 1903 in Paris between France, Belgium and England – the kit was specified as white trousers and jacket, mask with bib, and white unpadded gloves with optional gauntlet fitting tightly round the wrist. The trousers were made of white drill with six buttons fastening along the calf. Popular with Edwardian women were cotton one-piece outfits consisting of a jacket and flared skirt secured by 16 buttons [Fig. 11].

Early 20th century equipment suppliers offered gloves in at least six styles for foil, nine for epee and four for sabre. And from Wilkinson Sword’s catalogue of 1913 fencers could order jackets in canvas, brown twill with tan leather fronts, or white twill with white sheepskin or kid fronts. 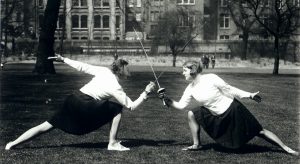 Four years later, there were complaints that the skirts were uncomfortable and even dangerous.

At the 1932 Olympics, Britain’s silver medallist Judy Guinness [seen in Fig. 13  beating 1928 Olympic champion Helene Mayer] was one of the first women to wear breeches, which soon became the garment of choice for female fencers. 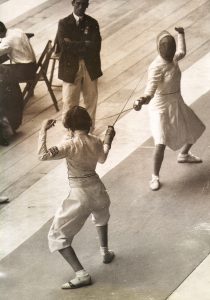 The lower edge of the target was bounded by a line drawn across the top of the hipbones and was indicated by a length of black piping sewn across the jacket. The women’s target was finally made the same as the men’s in 1964.