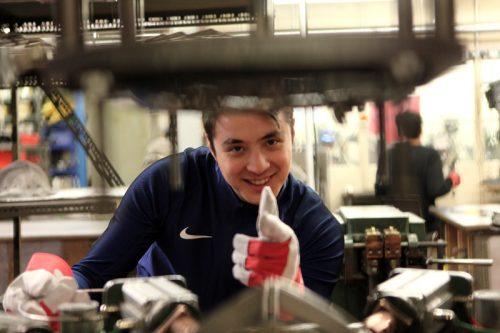 From London-Hendon to a district where the British capital feels a lot like San Francisco, from making fencing equipment to buying music albums... here's the second part of our not-so-ordinary London city guide, written by Olympic Silver medalist (and big rock'n'roll lover!) Alexander Massialas. If you want to know where London's best record store is (no, it's not in one of the more touristy boroughs!) or how Alex tackled the challenge to make a fencing mask in our factory (fans of our #FactorytourFriday series on Instagram, this is for you!), then we recommend you read on!

In London with Leon Paul (and rock music) – my travel diary, part II

The visit at the Leon Paul factory in London-Hendon, right next to the Leon Paul offices and fencing centre was one of the elements of my trip I had been looking forward to the most. As a mechanical engineering major at Stanford I spent a lot of time in the shop working on various projects. I’m pretty used to using laser cutters and 3-D printers, but I’ve also had lots of experience in the machine shop because for my Design and Manufacturing class at Stanford, I built a foil stand that can fit in a locker as my final project. Though they didn’t have any mills or lathes in the Leon Paul factory, just being around large machinery again was fun. After going through a tour of the premises and seeing some of the manufacturing process, I met the workers in the factory, among them Tyrone, who made the mask I used in Rio. 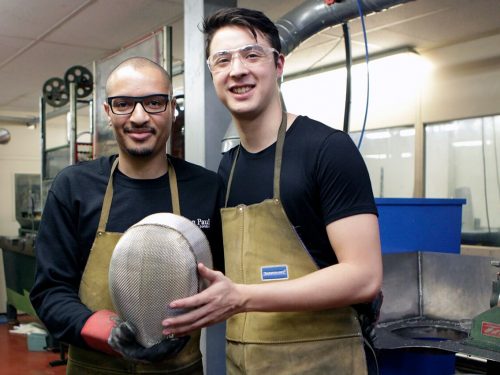 The process of making the Leon Paul X-Change mask was very interesting to me because all the machines they use to manufacture the masks were built in-house by Leon Paul and used exclusively by them so there’s nowhere else in the world with the same technology. As an engineer, I was extremely impressed by the way the machines were built, the ingenuity behind their design, and how robust they were considering Leon Paul have been using the same equipment since before I was born. When I first watched Tyrone making masks, I thought it was going to be a breeze because he was ripping through mask after mask like it was nobody’s business. If Tyrone could get the metal work done in a minute flat, how long could it possibly take me? Now, the video of me making the mask may only be 50 seconds but the guys at Leon Paul must’ve been feeling extremely generous because it took way longer for me to do any one process than it took Tyrone to finish a mask. I’m almost certain that I must’ve slowed down production by at least 5-fold, so it’s probably a good thing I was only in there for a day. 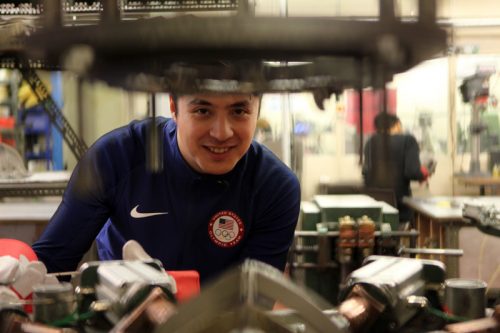 In particular the Nibbler was a devious machine that, when watching Tyrone, seemed like one of the easier machines to use but ended up being the most grueling task. All it does is take off extra material off the sides of the masks after you’ve welded the mesh of the mask to the frame and Tyrone was making it look easy, feeding in mask after mask and coming out with perfectly cut edges. When I mentioned how the Nibbler “actually looked not that bad” to use when watching Tyrone, I could hear the giggles under both him and Ben’s respective breaths that should’ve been the first sign of trouble to come. When I stepped up to the Nibbler myself, I realized just how infuriating this machine could be. I stood there, shoving the edges of the mask through the Nibbler but unlike Tyrone that was doing it in one easy, elliptical motion, I was stuck constantly restarting and rerunning the edges I had missed. I felt like every time I would feed the mask into the Nibbler too softly it would just spit it right out, yet when I used more force the mask wouldn’t budge. I was left there wrestling this mask through the Nibbler while Ben and Tyrone just stood there trying not to burst out in laughter. Nonetheless, once I finally finished my mask I felt elated. Not only was I finally finished with this physical endeavor, but as someone who uses all the equipment, it was really rewarding to see how everything is made, let alone be part of the process itself. Hopefully they still have the mask put aside or marked because I would love to see where my handiwork ends up going. 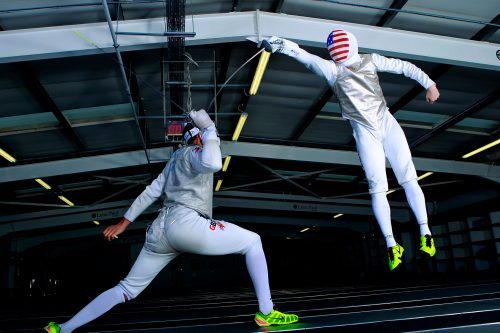 My last day in London, though originally supposed to be only for leisure, started with the morning training session that Richard and Ziemek had lured me into. Though I wasn’t necessarily ready to get back into training at the time, I was happy that I trained that morning. Getting to fence with Richard and members of the Hong Kong team that I generally wouldn’t have a chance to fence with except for in competition was fun and different.

After a quick shower at the center, Alex took me into London to do some sightseeing. Given that neither of us had eaten lunch yet, he decided to take me to the restaurant at the top of the Tate Modern. Proceeding a nice meal with a great view of St. Paul’s and the Thames, knowing that I love music, Alex and I headed to a record store called Rough Trade, in Shoreditch. 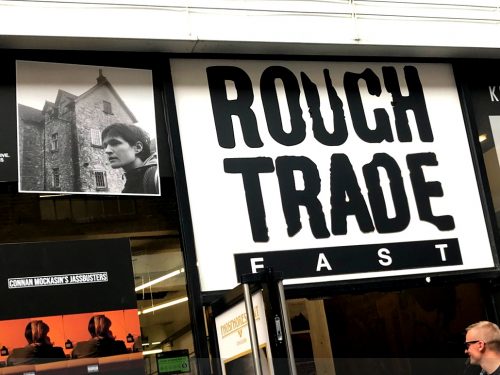 Shoreditch reminded me a lot of San Francisco with its mix of vibrant colors, pop up shops, and eccentric personalities (not only in the people but in the artwork and shops). Even though they look completely different, the feeling walking down the streets of Shoreditch reminded me a lot of how I feel walking around the Haight or Mission back home. Once we got to Rough Trade, I wanted to buy a record to commemorate the trip. Though they had aisle after aisle of different records, I wanted something distinctly British and an album that I like to listen to already. Definitely Maybe by Oasis, Inside In / Inside Out by the Kooks, Whatever People Say I Am, That's What I'm Not by the Arctic Monkeys, something along these lines. Unfortunately, I wasn’t able to find any of the albums that I was looking for, but I was able to walk away with an album that I did like. Though not British, I was able to stay within the Commonwealth with “Lonerism” by Tame Impala. 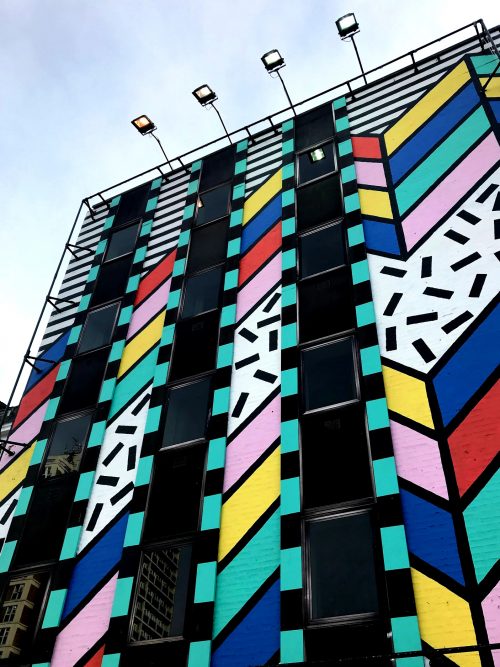 One of the artsy facades in Shoreditch (Picture © Leon Paul)

It was only fitting that my last stop in London before leaving was back in Camden with Ben, where I started this trip. Back in his old stomping grounds we strolled around, ate fish and chips, had a couple pints, and dropped in on a place with live music on a Wednesday evening. Satisfied, as I sat in the Uber heading back to the hotel, I couldn’t help but think about when I could make my next trip back to London. 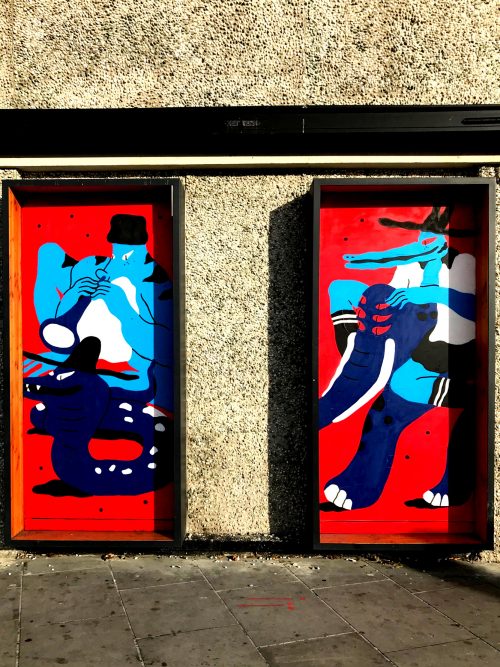 [Note of the editors of this blog: Our international employees couldn't agree more with Alex's last sentence... what about you, dear readers? Should you decide to discover our hometown on Alex's trails, let us know in the comments!]