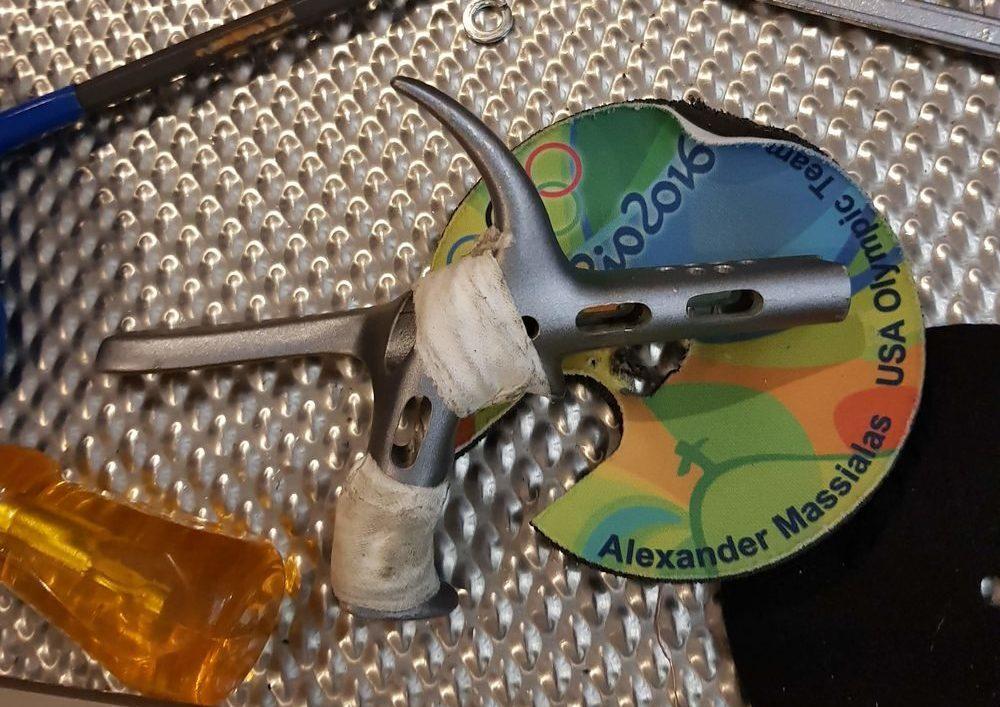 When Leon Paul launched the Mag-Tec grip I was a little skeptical about trying something new. No one had ever done something like this before and after fencing for 14 years with a standard pistol grip (albeit with a little bit of tape on the grip), I obviously wanted to make sure I really liked it if I was going to use it in practice and competition. In late 2017 and early 2018, Leon Paul sent me the first prototypes and I was instantly drawn by the reduced weight.

Last year I finished a degree in mechanical engineering at Stanford and one of my final projects was on the history and evolution of the pistol grip so I thought this would be a perfect product for me to help develop with them.

One of the reasons that I have always liked Leon Paul is because they are so eager to innovate and improve their products based off feedback from their athletes. With my degree in mechanical engineering, I feel like I can offer even more insight on products because I understand the manufacturing involved and the ideas of design thinking/rapid prototyping. When they initially approached me with the idea of making an even lighter handle, I was more than willing to help brainstorm and work on the product with them.

Initially we explored 3D printing, of which there are several types. This made a nice light handle but each type had its problems. Resin based printing (SLA) ended up with handles that were either flexible and tough, or hard and fragile. Printers which use hot plastic (FDM) ended up splitting along the lines between the layers. Unfortunately, there isn’t a way to feasibly 3D print using metal so it seemed like we would have to give up using 3D printing to manufacture the grips.

We went back to the drawing board and thought about how else we could reduce the weight of the handle without changing the material. That’s when we started looking at drilling out parts of the existing handle to reduce the weight.

When I first received the first “skeleton” grip from Leon Paul, I didn’t know what to expect. Would the various holes leave blisters on my hand? With holes drilled into the handle, would the change in how stress is distributed cause the grips to break more often? The Leon Paul grips are already the lightest out there, would the difference in weight really be that noticeable? With weight being taken away from the grip, would that throw off the balance of the blade? These were just a few of the questions I was asking myself before I had even tried it in practice.

My biggest worry from the very beginning was that the holes that were milled into the grip would leave blisters and cut up my glove. Going into my first fencing practice with the skeleton grip all I did was add some tape to where the pinky finger grasps the grip (which is how I tape all my grips) because I wanted to see if I would have this problem without adding any tape or padding.

I went through my first lesson with the new handle and I could immediately feel a difference. The grip made my foil feel lighter and I felt as though I could move my hand just a little bit faster. Even just letting the other fencers at the club hold it, they all described the experience of holding the foil with the new grip the same way: “air-y”. Not only was there a noticeable difference but, with just the lesson, I didn’t feel like the grip was causing any new blisters or chafing my hand uncomfortably. This was only a lesson though, now I needed to try it in bouts during a real fencing practice.

With the higher intensity and increased speed of bouting, I definitely felt right away that the grip was slightly uncomfortable. Though most of my hand felt fine, the only place where I could feel chafing was the last digit of the third finger because there was hole right there. After my first bout I quickly taped up the hole and continued fencing and for the rest of practice, I didn’t have any problems! It didn’t feel like I was chafing my finger anymore and it was a pleasure to use the grip from there on out.

I took this feedback to Leon Paul and together we decided that the middle two holes where your middle finger and ring finger sit should only go part way through the handle. This way you still have a lot of weight taken off the grip, but you don’t have to worry about the ergonomics of the grip since it feels the same.

I also suggested adding some more holes through the front of the handle vertically. This not only reduces weight but also helps adds more grip for your thumb and index finger.

I have since then incorporated the grip into my fencing practices and have even used it in competition at the World Cups. I actually received the final prototype in Budapest before I competed in the World Championships and used it when I was competing! I love how light the grip is and I believe every high level fencer would be able to tell the difference if they were to try it. The grip feels comfortable, the difference in weight is noticeable, and I haven’t had to change the way I set my blades.

This was the first time I worked on developing a product with Leon Paul and I have to say, it was very rewarding. Not only is it obvious that they care about improving their products so that their fencers have the highest chance to succeed, but the thought and user feedback that goes into developing their products in superb. It has been great to be involved in developing this product in conjunction with Leon Paul and I hope I can help out with more in the future!