Running the Great Wall Marathon in fencing kit: the race

Here it is, fencers: after the background story about how the whole project was born and the training update a few weeks ago, it is now time for the tell-all about Max Titmuss's experience of running the Great Wall Marathon in our Apex fencing uniform. A path littered with some unexpected organisational obstacles... and a happy ending to his charity project.

"They haven’t received our applications and they don’t know who we are", my friend said over the phone. "Oh shut up, stop winding me up. Did you get our race packs?" I fought back. "No, seriously, our names aren’t on the list and they have no record of us applying", my friend maintained. Less than twenty four hours until the marathon and things were off to a good start.

Various phone calls were made. We were assured that upon arriving at the hotel at 5am the next morning, our race packs would be ready. All that was left was to wake up at 4am and head off to the hotel where we would take the bus to the Wall.

The following morning, gathered outside a relatively swish hotel – Mr. Putin had stayed there a few weeks before, we were told – were my fellow masochists. Most of them were from Japan, which explained the man in the sumo costume, though it was a fairly international crowd. 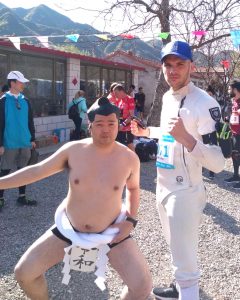 A fencer and a sumo ringer running the Great Wall Marathon

We boarded the buses. After a long a bumpy bus ride to God-knows-where, we arrived at some dusty hamlet. The race was imminent. However, the queues for the portaloos were interminable.

The course was demarcated by a series of points (A to E), which in the right combination formed a 42-km track. A flat run on a road, an crawl up a dusty trail to the Great Wall, and then on the Great Wall itself. Up and down, up and down.

Things started well enough. A brisk jog in the morning sun followed by a quick hike. Crowds made the going slow, but I wasn’t in a particular rush. Eventually we reached the Wall via some rickety ladders. Finally, the experience I had been waiting for. A perfectly sunny day with no pollution to spoil the views. The rolling hills of the Chinese countryside extended as far as the eye could see, though it was necessary to keep my eyes firmly on the steep steps in front of me. 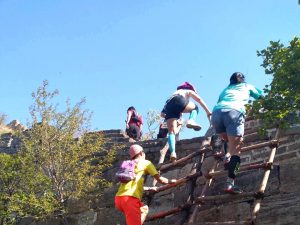 Climbing onto the wall

We carried on a while. Runners were looking puzzled. "We can’t find C", someone said, "we don’t know where to turn around." "The sea? Why are you looking for the sea? We’re miles inland!" I said. Obviously the sun was starting to toast my neurons. "Erm, no, point C," they replied, giving me a look somewhere between bewilderment and pity. It turned out the organisers had not put up any signs so nobody knew how far to run on this stretch. Another organisational triumph, meaning a number of runners ran more than a marathon.

Yet, onwards we went. In the right direction too, we hoped. Somewhere into the 20-somethingth kilometre I started to realise that running around on a hot, still day in a fencing kit was the least of my problems. My knee! A muscle started to twinge in a place I didn’t even know I had a muscle. Running on a level surface was just about manageable, but going up or down steps was proving painful: not ideal for when running on hills and up endless stairs. 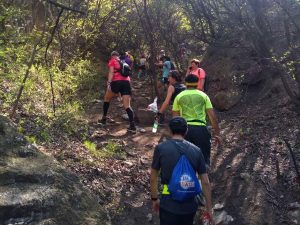 This surface is everything but level...

Spirits high but knee increasingly buggered, we marched on. Three quarters of the distance gone – only a brief five-or-so hours into the ordeal – my stomach starts to cramp. "Carbohydrates!", it insists, jabbing with needle-like insistence. I oblige and run into a nearby refuelling station to eat a bagel, giving my stomach some relief. However, while walking and talking, and forgetting that the building I was in was not designed around the needs of someone 6'4" (193cm), I manage to smash the top of my head against a doorframe, leading me to collapse straight on the floor, mouth full of bagel and head full of searing pain. After a few moments I manage to drag myself to my feet, wondering what next might happen on this increasingly fun occasion.

Getting back to the track I feel the anger of my right knee. Perhaps best not to cripple myself, I decide. For the last part of the marathon, I limp along determinedly. Back up the dusty trail. Starting to feel a bit weary now. A sense of light-headedness starts to come over me. "Just get to the top of the hill and there will be a water station", I tell myself. But of course, there wasn't. Another organisational triumph. While weighing up whether I could carry on up the Wall, a man dressed as Sparticus offers me a Gatorade, followed shortly by a Japanese businessman offering me a banana. "Oh no, I’m hallucinating now", I begin to think, before realising they are just another couple of barmy marathon runners.

Their help proves enough. I carry on, crossing the finish line in brisk eight hours. Being the professional athlete I am, my eyes are immediately drawn to the beer being drunk by people who have already finished. A pair of South African brothers offer me a drink and I gladly accept. I am not sure how you are meant to recover after running and limping 42km – perhaps it involves an ice bath - but my method was copious amounts of beer, a giant pizza, and being educated in the insulting names South Africans have for the British. Then, after a long journey back to Beijing and suitable period of revelry, collapsing in bed.

I am filled with a deep sense of gratitude to everybody who donated to Ataxia UK and supported me on this silly escapade. Together we managed to raise an incredibly amount – over £2,200. I hope that through the money we have raised we can make a meaningful difference to people who suffer from the condition. To everybody who donated – amounts big and small – I thank you sincerely.