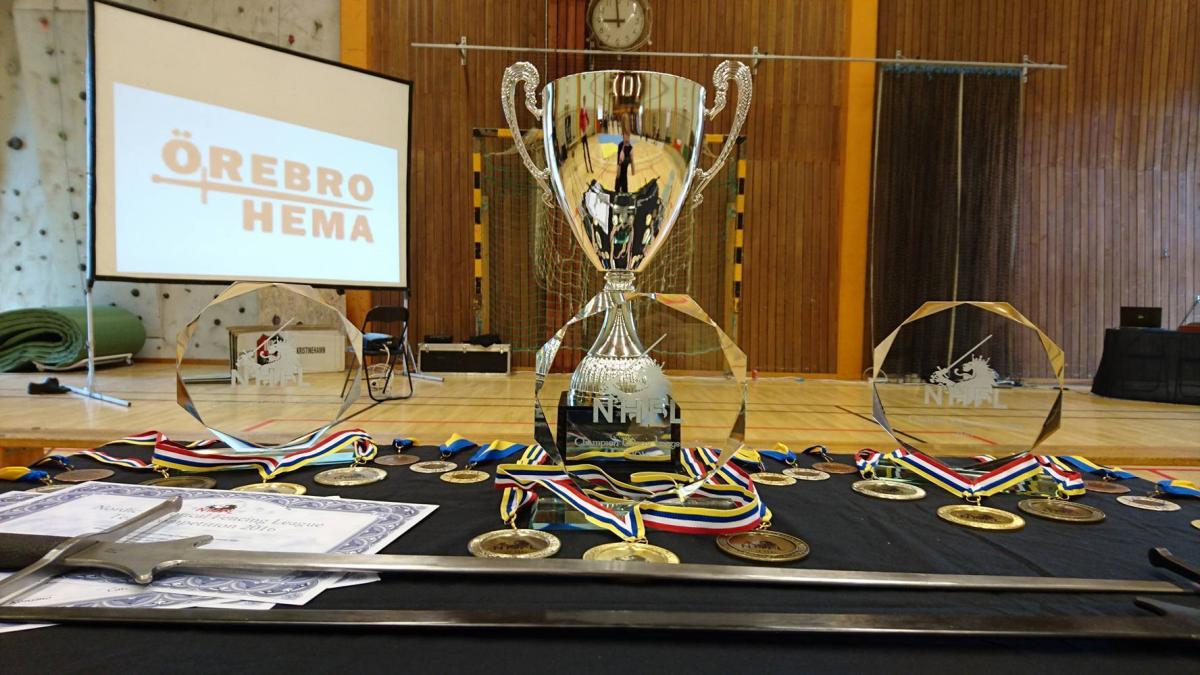 HEMA tournaments are now forming into leagues. What benefits and what risks might we expect to come with this development?

One of my students just grabbed silver in the Nordic Historical Fencing League Women’s Longsword. As well as bragging, I mention this because it’s the result of four tournaments’ worth of fighting which culminated this last weekend. Like a team in a football league, there was some certainty of how places will look after the league’s final event but there was still everything to fight for if she wanted to lift the cup. Still, silver is quite an achievement in the murderer's row of Nordic Women's HEMA.

The NHFL may be the world’s oldest HEMA league, although that only means it’s in its third year. Here’s a handful of newer leagues:

My own contribution is the European Longsword Triathlon (an award for the best longsword competitor across the Paris, Dublin and London(ish) tournaments coming up in June and July, although without a single ruleset)

There’s a lot to look forwards to in this explosion of leagues. The benefits of HEMA competitions versus simple sparring, one-off judged bouts or  non-competition events have been noted elsewhere at length - tournaments are amongst other things function as a:

Leagues provide all of these benefits, plus they offer an avenue for consistency and repetition to developing excellence in both fencing, judging and organisation. HEMA practitioners get a chance to repeatedly compete and show consistent improvement in performance across time. As for organisers - well, who hasn’t encountered a tournament event that could use more work on judging or organisation?

Fencing in a league also offers a chance to enjoy additional narrative and drama, as fencers develop rivalries (hopefully friendly!) and jostle for their place in the rankings. It’s been a great motivation for my students to go back and fight previous opponents, hopefully with an improved gameplan and a few new tools in the kit. It also promotes clubs to compete as teams, since the NHFL has a team cup, and by providing rankings for all fighters rather than only recognizing medallists it encourages and recognizes improvements in all competitors. Think of knowing that your hard work has paid off when you rise from 25th to 5th, rather than only seeing "you still missed out on the medal matches".

Tournaments have, however, had their detractors, and such objections also apply to leagues. Amongst the (more reasonable) apprehensions are that “sportification” risks the historical underpinning of HEMA as fencers become more focused on performance under a ruleset than mastery of a historical system, and that emphasis on competition results unfairly shines a spotlight on physically gifted fighters over more technical practitioners. The latter is something of a nonsense - technical ability is on display as fencers compete, and if one displays amazing technical ability only to lose to even more outstanding physicality it will be seen by spectators and applauded. If one fences in a mediocre manner, the loss compounded by personal unfitness, and complains that a theoretical but unapplied understanding of fencing wasn’t counted, then it will also be noted by those watching...

The major risk with these leagues’ formation is that it risks an acceleration of the first issue as leagues require rulesets to be consistent across events. One strength of the HEMA competition scene is the diversity of rulesets in use prevents anyone from focusing on exploiting imbalances in a ruleset or developing a style to exploit loopholes in rules - if they want to win more than a small subset of tournaments, then they must be able to win by many rulesets. If there are fewer rulesets out there, the issues of “sportification” and over-focus on fighting to the ruleset are amplified.

Another potential issue is pricing out participants. To perform well in a league’s table and overall rankings means attending every event in it. You’ve got to do well consistently to stand a chance of becoming champion, and if you miss any event then you lose standing in the table. Travel isn’t cheap, especially international travel, even if the events themselves are affordably priced. Nor is it easy for those with demanding jobs, families, and other commitments in their lives to make time for such events. I know of many superb longsword competitors who’re not internationally recognised because they are unable to regularly travel to compete away from their local region.

The flipside to this pricing argument is that as leagues are regionally organised, at least for now, this means they are actually better for fencers in the area, as they won’t have to travel long distances to get to multiple competitions in a year. Better to have to make four day trips than four long flights!

Like tournaments themselves, leagues have been accused from some quarters of "promoting elitism". If it is elitism to want to have consistent, regular avenues to test practice, then tournaments and leagues are undoubtedly elitist. Yet their existence doesn’t in itself invalidate any other form of training or indeed of pressure testing - my personal feeling on leagues and tournaments is that insecurities manifesting in non-competitors are simply that. Insecurities. If their activities look unconvincing by comparison with competition or with the abilities of those who find competition a good metric or motivation, then the burden is on them to improve their own work.