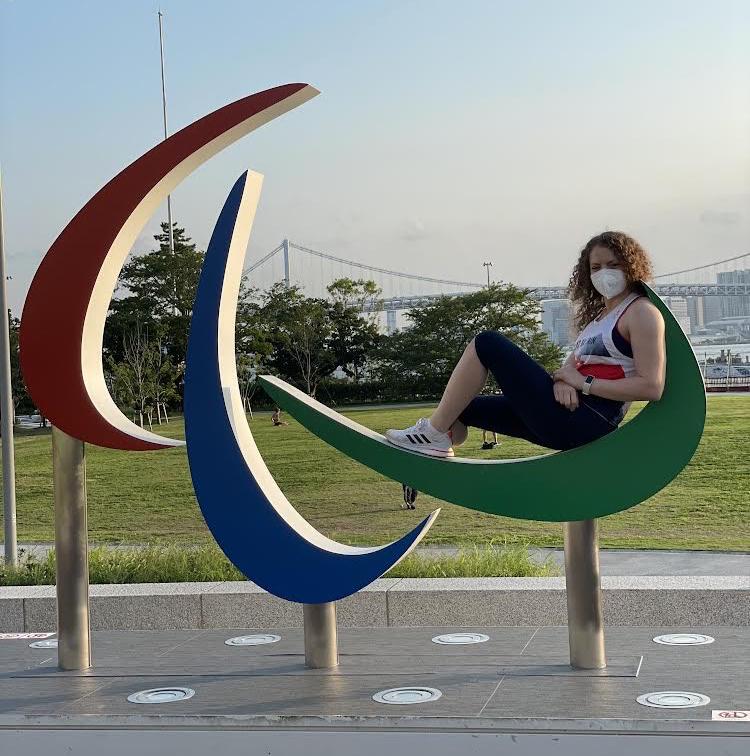 To celebrate International Women’s Day, we spoke to Gemma Collis, a British wheelchair fencer who competed in the 2012, 2016 and 2021 Paralympics and is also a member of The Gender Equity Commission in IWAS Wheelchair Fencing.

How did you get into fencing?
Growing up I was very athletic and participated in a variety of sports, competing at national level in Figure Skating and representing my county in Hockey and Athletics. By the age of fifteen, I was county Triple Jump champion and had high ambitions of competing for my country.

However, in 2008, those dreams were cruelly dashed when I was diagnosed with Complex Regional Pain Syndrome, a progressive nervous system disease that affects the functioning of the nerves in my right leg. I was devastated and believed that my sporting career was over.

Determined to remain involved in sport, I began coaching, officiating and volunteering at sports events, discovering more about disability sport in the process. Realising that I was eligible, I began playing Wheelchair Basketball in 2010, competing for the Aces, Newcastle Eagles and Wales.

However, it was not until I started my Law degree at Durham University that I tried Wheelchair Fencing for the first time, after being spotted by the GB Head Coach, Laszlo Jakab. I immediately fell in love with the sport and fortunately those around me felt I had potential.

Three months later I represented Great Britain at my first international competition, the 2012 Malchow Wheelchair Fencing World Cup, and, just ten months after taking up the sport, competed at the London 2012 Paralympics.

I've been hooked since then - and am fortunate to have competed at both the Rio 2016 and Tokyo 2020 Games since. I'm now aiming for Paris 2024, where I hope to finally claim my first Paralympic medal!

What did you dream of doing when you were a younger girl?
My dream was always to go to an Olympic Games, and to win a medal. That dream has since changed to a Paralympic Games - which I'm fortunate to have already achieved three times over. Now it's just a case of chasing down that elusive medal in Paris 2024 and beyond!.

What does being a female athlete mean to you?
As a female athlete, I really hope to inspire young girls to follow their dreams - whatever they may be. It might not always be easy, sometimes you might face adversity or prejudice but the key is to never let that stop you. If you're willing to work hard enough, and want it badly enough, there is nothing that you can't achieve - no matter what anyone else says!

Has the inequality in sport lessened since you started fencing?
A little - Sabre becoming a Paralympic weapon for women for the first time in Tokyo was a huge step towards gender equality. However, there's definitely still a lot more to be done! As a member of the International Wheelchair Fencing Gender Equity Commission, I'm really proud to hopefully be playing an active role in addressing what inequalities do still exist.

What’s your favourite thing about fencing?
The fact you are always learning. As a fencer, you will never be 'complete' - there is always a new scenario or opponent to adapt your technique and tactics to, which means there is always room to develop. That's what makes coming to training day in, day out remain so enjoyable, which to me is hugely important.

Aside from that, I just love the buzz and adrenaline rush fencing provides. If you score a hit, or win a fight, the feeling really is like no other I have ever experienced in sport. The 'You vs Them' nature of the sport really intensifies every emotion - which is why you'll see fencers screaming so loud after scoring!

Do you think there are stereotypes attached to female athletes?
Yes - I think often female athletes are seen as being strong and powerful, at the expense of being "feminine" or "attractive". I think that's something that really needs to change. We should be teaching young girls that they can be all of the above at the same time - there's no need to choose between one or the other. They aren't mutually exclusive - mental and physical strength, independence and ambition is something we should value equally in men and women, both inside and outside of sport.

I also think people often think you have to look a certain way to be involved with sport as a woman, which can result in some women feeling that sport and physical activity isn't somewhere they belong. In reality, we should be encouraging and supporting all women and men to move their bodies, and stay active - in whatever way they most enjoy. Sport and being active shouldn't be about what you look like, it should simply be about how it makes you feel, physically and mentally. It should be a safe space for anyone to get involved.

Your proudest moment in sport so far?
Winning my first World Cup gold in Montreal in 2018. It was a huge breakthrough for me, beating the then World Number 1 Zsuzsanna Krajnyak in the final to become the first British woman to ever win World Cup gold. It also came after taking a lengthy break from fencing to have my right leg amputated, which I think made the moment even more special. It gave me the confidence that I am still improving, and that I am capable of achieving everything I set out to - now it's just a matter of becoming more consistent so that those moments become more and more regular!

On International Women’s Day, what advice would you give to girls who want to get into sport?
Find something you love, and then give it your all - whatever that may be! Whether you're looking to get involved in a local club as a hobby to be more active and make friends, or wish to pursue a career in sport, invest in yourself and being the best version of you you can be. That may be physically getting stronger, becoming technically better or just building your confidence in a group environment. Sport has so many benefits, and will teach you so many transferrable skills you'll rely upon and be thankful for in every other area of life.

Huge thank you to Gemma for sharing her honest thoughts with us for IWD. We wish you the best of luck for Paris and beyond!

Make sure to follow Gemma’s journey using the links below: