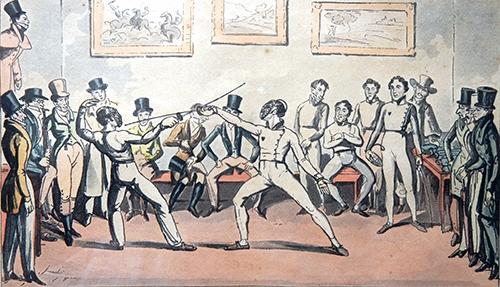 Some idea of what it was like to be a fencer in Victorian England can be gleaned from the records of the oldest club in the country, London Thames Fencing Club, which was founded as the London Fencing Club in 1848. Paying an annual subscription of £5 (equivalent to about £480 today)...

and with club opening hours of 10 am to 1 pm and 3 pm to 7 pm daily, LFC members were clearly men of means and leisure drawn largely from the aristocracy and the army. They included Edward, Prince of Wales (later Edward VII), and his brother Alfred, Duke of Edinburgh; the Duke of Marlborough, his son the Marquis of Blandford and, in 1895, his grandson Winston Churchill (Public Schools foil champion in 1896); the Duke of Beaufort and his three sons the Marquis of Worcester and Lords Henry and Edward Somerset; Sir Arthur Sullivan (of Gilbert and Sullivan fame) who fenced regularly during the 1880s; the splendidly eponymous Randolph Wemyss of Wemyss Castle, Wemyss; and Col. G. M. Gordon-Ives whose recreations listed in Who's Who, as well as fencing and swordplay, included the admirable activity of “trying to put right the wrong and corrupt in the country”.

Average membership was 250, about 40 new members being elected each year. Every member had to be proposed and seconded and such was the concern for a man's social standing that the proposer of one Frank Waterer of Bagshot for the Sword Club, which merged with the LFC, felt it necessary to write to the committee as follows: “I enclose the nomination of my friend Waterer for the Sword Club. I can only say that he is quite a proper person for your committee to accept. It would perhaps not be necessary to say this but that I notice he has described himself as a Nurseryman to which exception might be taken by anybody who did not know the firm which has, I believe, been in existence for a century or more and is known all over the continent and America.”

Many members belonged to several London clubs and probably joined more because it was the fashionable thing to do than from any strong desire to fence. Nevertheless, the membership did enough fencing to break large quantities of foil blades, as evidenced by the numbers bought by the club – 96 dozen in 1866, 24 dozen in 1867, 87 dozen in 1868. Altogether, over an eight-year period, nearly 5000 blades were bought at prices in 2018 terms ranging from £6 in the 1850s down to £3 50p by the end of the century as competition between French and German suppliers increased. The club's annual income was around £1200 (£115,000 today) but expenses were also high. Rent for the premises at Cleveland Row, St James, was £150 p.a. (£14,000), rates £35 (£3300) and salaries £500 (£48,000), plus heating, lighting. cleaning, repairs and the cost of periodic public fencing displays.

To understand how the style of fencing changed during the 19th century it is useful to read F C Grove's introduction to the Badminton series on Fencing, 1889, and J D Aylward's excellent book The English Master of Arms,  1956. In the early decades, the exaggerated style that had developed during the late 18th century prevailed with the emphasis on formal and precise movements of the hand. Hits were only valid on the right breast and the expert fencer prided himself on not moving from his on-guard position. Illustrations of the period, such as the Regency fencing bout drawn by George Cruickshank for Pierce Egan's Life in London, 1821, (Fig. 1), show fencers closely surrounded by spectators.

Although masks were gradually becoming accepted, the old style of fencing with the head back for protection was still taught. As a result, a fencer's whole weight rested on the back leg, making lunging and recovery slow and clumsy. If an attack was parried, the riposte was delayed until the attacker had recovered his guard. Long phrases without a hit on either side were regarded as the highest state of the art. Fencing was impressive but stereotyped. The man who perhaps more than any other changed fencing from an art form to a modern sport was Francois-Joseph Bertrand, a Parisian master who flourished in the 1830s. Known as the Napoleon of the foil, he swept away the conventions of the time, demanding above all speed and mobility. The weight of the body moved forward to rest equally on both feet. A parry was followed by an immediate riposte and fencers were free to advance or retire according to circumstances. He reduced the eight recognised parries to four – quarte, tierce (which he preferred to sixte), septime and seconde (rather than octave) – and encouraged the use of time thrusts and counter-attacks. His system was put into practice in England by his most notable pupil, Pierre Prevost, who taught at the LFC for ten years and handed over to his son, Camille Prevost, one of the great masters of the 19th century. The classical French style can be clearly recognised in Camille Prevost's illustrations to the Badminton Fencing (Fig. 2). 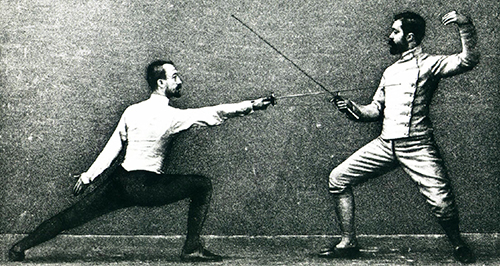 Another master who did much to popularise fencing in England was Baptiste Bertrand (no relation to F-J). He opened a salle d’armes in 1856 and founded a dynasty of fencing masters that continued with his son Felix and grandson Leon. Baptiste Bertrand was instrumental in encouraging women to fence. Following his success in teaching the three daughters of the Prince of Wales, fencing for women started to become popular. He was also called upon to stage all the fight scenes for the theatre and a number of his actor pupils became so enthusiastic that, in 1900, they formed the Foil Club.

In the early 19th century fencing clothing followed the tightly cut Regency fashion supplemented by a heavily padded glove, a small wire mask covering the face only and an open-toed sandal for the front foot with a leather projection which made a resonant sound when slapped on the floor. The foil itself was supplied with a French or Italian handle and had a blade only about 80 cm long with a solid round or open figure-of-eight guard of steel or brass, a cord-bound square handle and around or urn-shaped pommel. By the 1850s the mask had become more substantial, the jacket and trousers more practical and the foil blade had increased in length to 87 cm, with a standard open figure-of-eight guard bent upwards and a heavy oblong pommel, as shown in an early photograph of a fencer (Fig. 3). 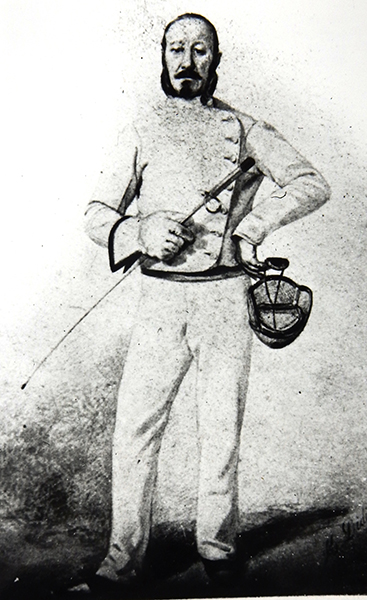 The latter half of the century saw the introduction of knee breeches (Fig. 2), although many fencers continued to wear long flannels, such as the LFC master Vital Lebailly (Fig. 4). 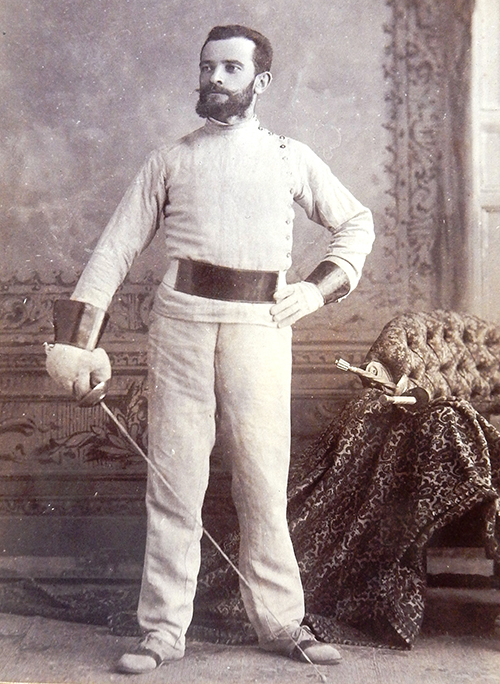 The epee was adopted in France in the second half of the 19th century as a result of the dissatisfaction felt by amateurs with the conventions of the foil. By the turn of the century, it had spread to England as had the light Italian fencing sabre. Individual foil competitions began to take place during the last two decades and in 1901 the Amateur Fencing Association was formed.