THE DEVELOPMENT OF FOIL (Part 1)

Just when and where the lightweight foil emerged as a weapon in its own right remains an intriguing mystery in the history of fencing. Purpose-made practice swords with buttoned tips had been available since the rapier became a popular civilian sword in the 16th century. So how did the foil develop?

In a treatise written in 1550, the Italian fencing master Viggiani is the first to mention the use of practice weapons – arme di gioco (weapons of play) and spada da marra (hoe sword). During the last quarter of the 16th century, fencing terms for foils gradually came into use: floures in Saint-Didier’s treatise of 1573, floret in Montaigne’s “un rude tireur le floret au poing” (1580), foile in Shakespeare’s “the fencer’s foiles, which hit, but hurt not” (1598) and fioretti defined by Florio as “foiles to play at rapier and dagger with” (1598). But these terms described any rebated or buttoned sword rather than the sporting weapon we know today.

During the reign of Louis XIII (1610-1643), there emerged a fashion for wearing short coats, which could not be worn elegantly with the long and cumbersome rapier. A shorter lighter court sword was required and blades were gradually reduced in length until by the 1640s a completely new weapon had evolved: the small sword. This lighter and more manoeuvrable weapon was far more dangerous than its predecessor. To avoid the loss of an eye or other facial damage and to allow the skills of swordplay to be demonstrated in relative safety, rules had to be established.

No one knows who first devised these rules or introduced the practice weapon that we now recognise as the foil. But in 1621, the modern word fleuret was used for the first time in a French encyclopedia1 which mentioned that the point was used in fencing rather than the cut. This book describes certain conventions to be observed in a salle d’armes, including the need to avoid hits to the face, but this is a safety precaution in the days before masks rather than a set of rules governing foil play. So, although something called a fleuret was to be found in the salle, there were as yet few restrictions on how it could be used. Books on swordplay continued to describe and illustrate the rapier [Fig. 1 shows a 1611 illustration of practice rapiers]. But the history of steel making shows that by the early 17th century a reliable process of transforming iron into steel had been developed, allowing bladesmiths to forge relatively inexpensive flexible tapered blades of consistent quality.

By 1653 the French provincial fencing master Charles Besnard2 was teaching the parry and riposte as two distinct movements, but his crude illustrations do not show a recognisable foil. He also posed the question: “Why does a man with little skill, courageous but lacking in judgment, often win with sword in hand over someone who would beat a hundred like him with the foil [fleuret]?” His view was that frequent use of a harmless weapon like the foil took away a swordsman’s sense of danger. That he needed to put the question at all implies that the foil with its artificial conventions was already in use by the mid-17th century [Fig. 2 shows a pair of  foils of around 1650]. 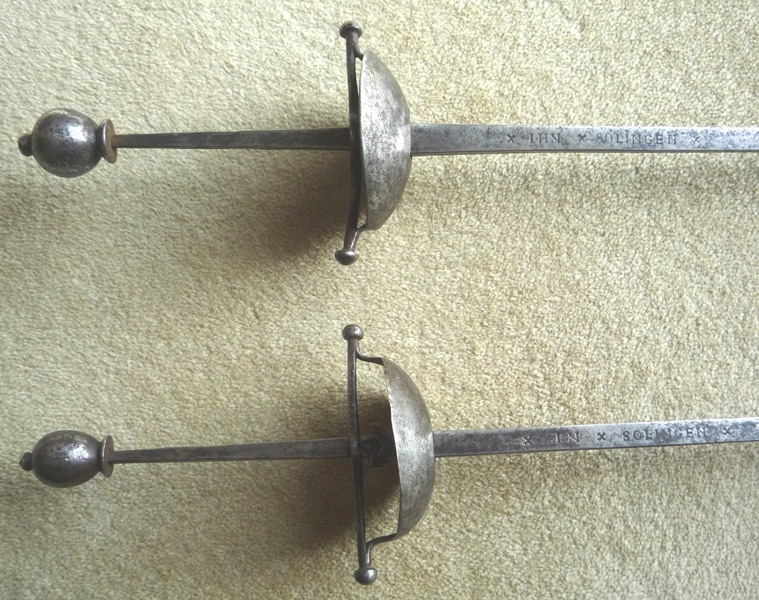 Yet it was not until 1670 that a book was published illustrating for the first time what is clearly the ancestor of the modern foil, with hits made only to the body using long flexible blades [Fig. 3]. Written by the appropriately named De La Touche3, though without identifying the rules of foil play or even identifying the weapon as a fleuret, the book shows that foil fencing was a popular entertainment at the court of Louis XIV, as indicated by a copperplate engraving of a match before the king [Fig. 4]. 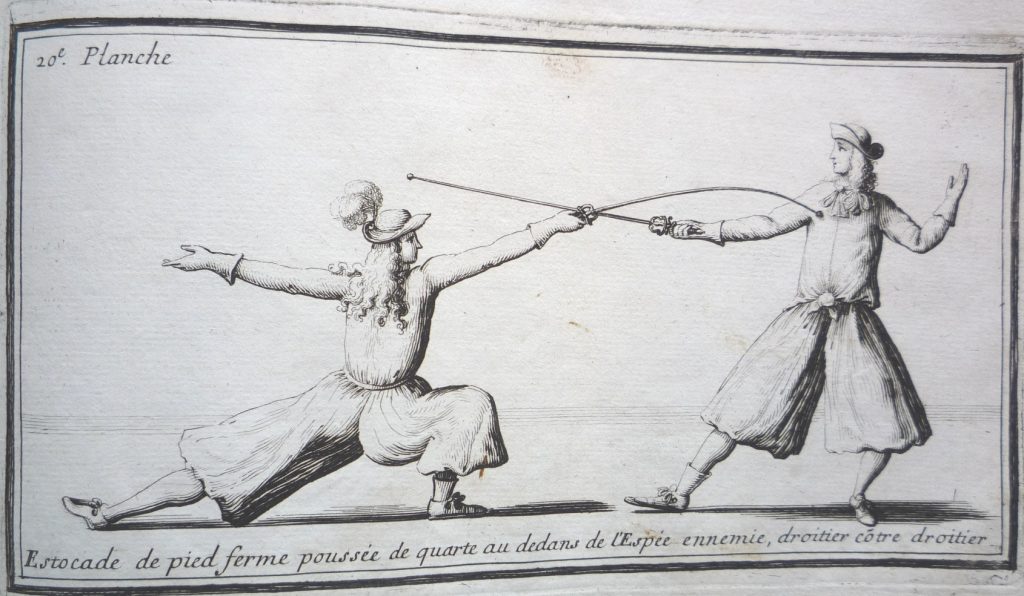 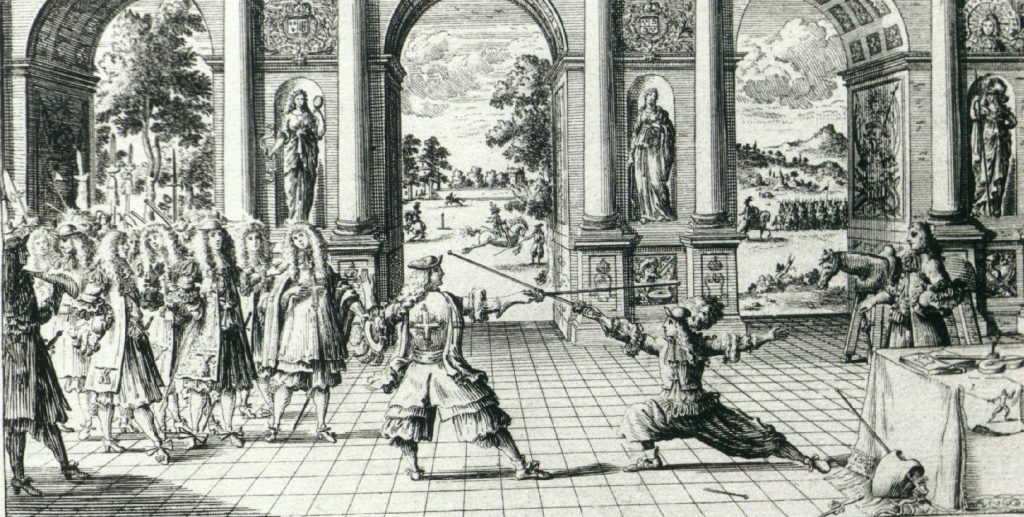 All the more curious, then, that the first mention of the actual rules governing foil practice should occur in an obscure treatise by the Scottish amateur enthusiast Sir William Hope in 16924. In a section on Laws to be Observed in all Fencing Schools, Hope makes it clear that although a man engaged with ‘sharps’ can thrust at any part of the body, in schools “no thrusts should be allowed, or accounted as fair, which are not given in the trunk of the body, that is beneath the neck and above the headband of the breeches and within the two shoulders.” Foils, or fleurets as he called them to indicate their French origin, had to be of equal length and bouts were for three hits. A piece of sponge dipped in vermilion was attached to the buttoned tips to aid the judges and each hit was marked before continuing play.

It is hard to believe that in France practitioners of the new art had to wait another four years to be able to refer to the rules, but a treatise of 1696 by Jean Labat5 of Toulouse is the earliest French work yet found to describe what must have been observed in Paris for decades. (A manuscript draft of this work dated 1682 is in the Fick Collection, Royal Armoury, Stockholm, but it does not include the rules.) The English translation of Labat’s work in 1734 says, “Thrusts with the Foil are good only on the body, and with the Sword they are good everywhere.”

The basic conventions have changed little over the centuries. Lest anyone think that the problem of defining the attack is a new phenomenon, Labat made it clear that there was a right of way: if both fencers hit, only the attacker scored. Double hits did not count, but if one was on target and the other off, the valid hit alone scored. A hit made immediately after a disarm counted, but not one made after parrying with the unarmed hand. Fencers who deliberately made a hit to face were disqualified. Masters were not allowed to help their pupils.

In what was to be his major work on fencing, published in 17076, Sir William Hope noted that hits on the wrist, arms, thighs, legs or feet were allowed, although not counted, as a preparation for an encounter with sharps, when such hits could be useful for disabling an opponent. Hope emphasised the importance of distance and favoured retreating by a step or two against aggressive opponents, “without being any wayes accounted a coward.” A competitor was not allowed to take the pommel in his palm and stretch out his forefinger along the handle, thereby gaining nearly 3 inches “a practice of subtilty and cunning not easily discovered by those who are only novices in the art.”

One hundred years later, Joseph Roland7 warned against those who twist their bodies, turn their back to avoid being hit, or let their bodies fall so low on the lunge “that you would imagine they were paying homage to the adversary’s toe; so that by these, and numerous other elegant motions, they will often prevent the adversary being able to hit or aim at the breast, which is the only place where the touches are counted in fencing.” He explained that the reason why hits were valid only on the breast was to make fencing as safe as possible, saying “if a hit at any part of the body was to be counted as good, the art would become quite in disuse, as no one would practice it, if attended at every lunge with the danger of being injured for life.” That it should be necessary to warn of the dangers of injury in the first decade of the 19th century shows that, some 50 years after its invention, the wire mask was still not in common use.

The purpose of foil fencing, according to Antoine La Boëssière8, son of the inventor of the wire mask, was to demonstrate the best technique. The fencing historian Archie Corble said, “it was customary in the small sword period that a man having parried a thrust should withhold his riposte until his opponent had recovered from the lunge.9[Fig. 5 shows Angelo’s School of Arms in 1787.] Good fencers did not advance or retire more than half an inch, but stood their ground and made attacks preceded by small beats. At the end of a bout the left foot should be in exactly the same place as at the start. This high degree of technical dexterity could only be maintained for three or four hits before the fencers took a rest, placing the heel of the right foot against the left ankle to preserve the position. 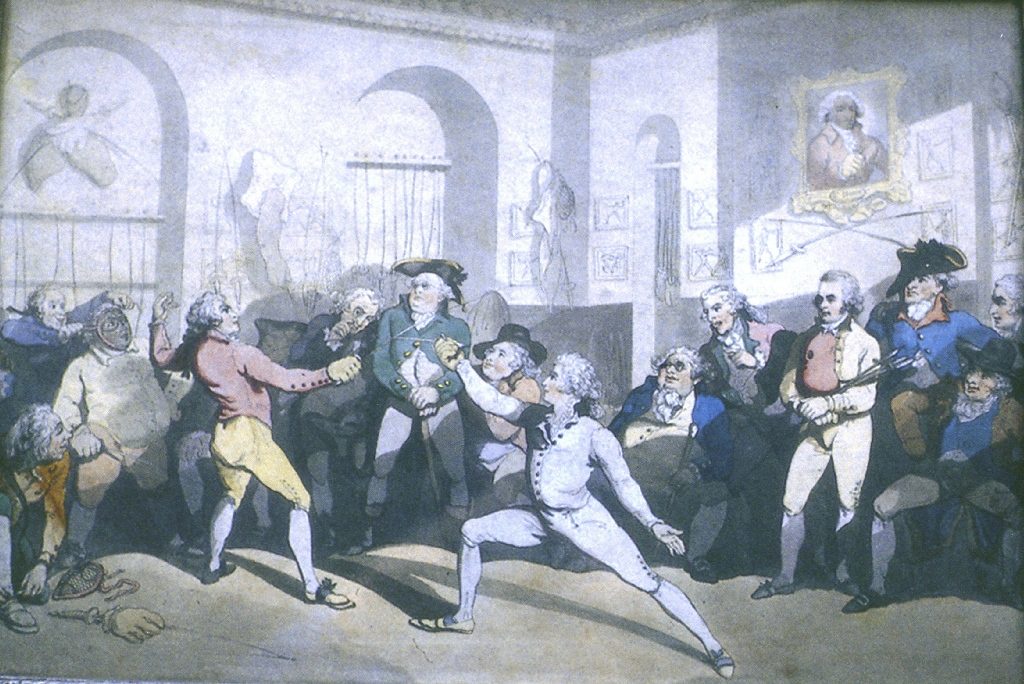 By 1836 when the mask had finally been generally accepted, Barthélemy De Bast10 pointed out that, since a public fencing match was the goal towards which all lessons led, it should be undertaken with the same seriousness as a duel. A match was preceded by an elaborate demonstration of technique and precision known as tirer au mur, which became known as the Grand Salute. It was expected that each fencer would announce a hit received in a loud voice.

George Chapman11 maintained that hits counted only if delivered between neck and waist “provided that the players do not purposely hide the breast with the sword arm or by contortions of the body.” In the sequel to his Foil Practice published in 1864, he went on to say, “In such cases, all hits upon any part of the person above the hips should be accounted good.”

From the late 1850s blades began to be stamped with a number: 4, about 840 mm long and flexible for use in lessons, and 5, about 880 mm long and stiffer for assaults. The first annual competitions at foil were introduced at the Royal Military Tournament in 1880, with bouts fought for five hits on a platform 24 ft x 4 ft. If a fencer stepped off the platform with either foot, he lost a hit. Jackets were made of a white material and foil points were covered with “a black preparation” to aid judging.