THE DEVELOPMENT OF FENCING MEDALS 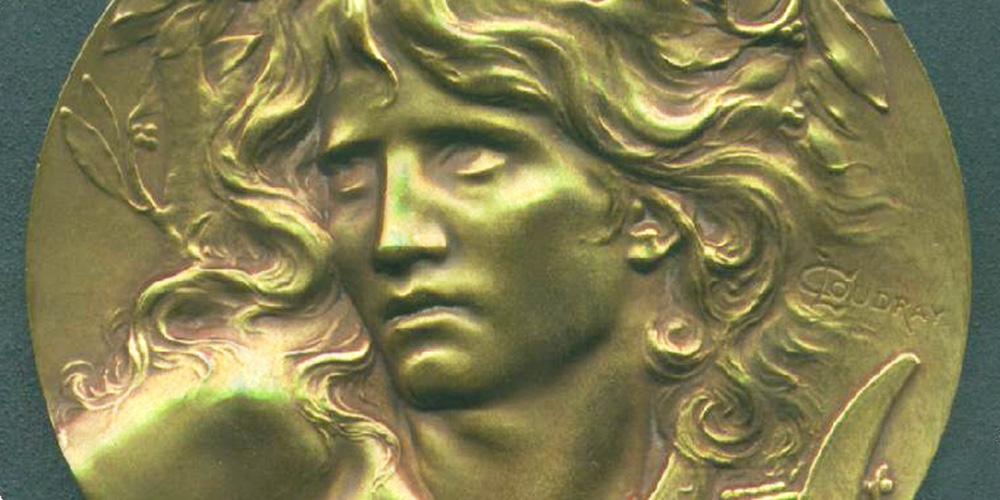 Fencing medals have been awarded since the 18th century when fencing masters began presenting engraved silver medal prizes to the winners of annual tournaments at schools where they taught. This practice continued into the second half of the 19th century, as shown by a Scottish silver oval pendant inscribed Messrs Foucart’s Fencing Class, 1st Prize, Master W Taylor, Glasgow Academy, Session 1856-7 [Fig. 1].

Then in the last quarter of the 19th century the French revival of the cast medal as an art form led to the design of prominent figures on medals. In Britain the first fencer to be recognised in this way was the Frenchman Baptiste Bertrand (1811-1898), who founded his own salle d’armes in 1852 and went on to establish a dynasty of three generations of fencing masters. In 1889 he appeared on a 72 mm diameter bronze medal by a French artist working in London, Edouard Lanteri [Fig. 2].

Another rare medal of a fencer, designed by Sir George Frampton (1860-1928), was cast in 1896 to commemorate Henry Arthur Colmore-Dunn [Fig. 3]. A member of the London Fencing Club, Colmore-Dunn (1859-1896) was a barrister and author of the popular pocket manual, Fencing, which was first published in 1889 and continued in print until 1931. He died of typhoid on a ship bound for South Africa aged just 37.

The production of fine art medals was stimulated by the first modern Olympic Games in 1896. What made precisely depicted scenes possible was the reducing machine, which allowed sculptors to model on a large scale while still achieving the effect of fine detail when their work was reduced. The first artist to take full advantage of the new technology was Jules-Clément Chaplain (1839-1909), an exceptional portraitist who brought animation and realism to his compositions. His design for an Olympic medal (silver for first place and bronze for second, nothing for third – only in 1904 did gold, silver and bronze medals start to be awarded) shows a portrait of Zeus with a globe supporting a metaphorical figure of the goddess of victory (Nike) holding a laurel branch [Fig. 4], while the reverse shows the Acropolis inscribed Olympic Games Athens 1896. When the English epee team were runners-up at the Interim Olympics in Athens 10 years later, they received the same medal with the year changed.

As the artistic hub of Europe, Paris had enveloped Art Nouveau from its beginning in the early 1890s. Providing a natural link between painting and sculpture, medallists played an important part in the new movement. The spread of Art Nouveau culture resulted in a surge of interest in medallic sculpture, created by such artists as Frédéric Vernon (1858-1912), whose design of a foilist in the early 1890s, left hand on hip holding a mask [Fig. 5], became the first fencing art medal to become widely available. Vernon also designed the winged goddess medal awarded to the athletes filling the first three places at each event in the 1900 Olympics.

These Games were a minor adjunct to the Paris Exposition Universelle. Many athletes didn’t even know that the events they competed in were part of the Olympics. But all participants received a plaquette as a souvenir of both the Games and the Expo [Fig. 6] designed by Louis-Oscar Roty (1846-1911), who revived the tradition of working in a rectangular format. In entering the epee tournament, Charles Newton-Robinson, founder of the Epee Club, and Josiah Bowden, British vice-consul in Paris, became the first two British fencers to take part in an Olympic Games; also fencing for GB in the masters’ foil event was Eugène Plisson.

In May 1904 the first official British epee team took part in the Coupe Internationale in Paris. To commemorate the meeting, the French team, Les Armes de France, presented all participants with a silver gilt plaquette by Jules Desbois (1851-1935) showing the naked figure of victory holding the symbols of triumph – palm branches and a laurel wreath – with assorted weapons at her feet [Fig. 8]. Later that year the British epee team that came second in Ostend received one of the best known Art Nouveau designs, Orpheus at the Gates of Hell [Fig. 9] by Lucien Coudray (1864-1932).

At the London Olympic Games of 1908, the commemorative medal by the Australian-born sculptor Sir Bertram Mackennal (1863-1931) showed Nike standing on a globe, holding a palm branch and a horn, the reverse showing a triumphant winner driving a chariot [Fig. 10]. Mackennal went on to design the Coronation medal for King George V and produced the king’s head design for all George V coinage.

The popularity of art medals as prizes quickly grew and Souzy’s 1908 catalogue was able to illustrate six different fencing scenes, each available in five sizes and five treatments. One of the most attractive was a rectangular plaquette by Coudray showing two young foilists in a woodland setting, while a group of five fencing masters in the background discuss their technique [Fig. 11].

Another popular design, offered as a medal or plaquette, showing a fencer flexing a foil, with two smaller figures saluting in the background [Fig. 12], was executed by the sculptor Adolphe Rivet (1855-1925), who produced busts and statues as well as medals.

An artist deeply involved in the fencing world at this time was Ernesta Robert-Merignac, daughter of the fencing master and author Georges Robert and wife of Emile Merignac, who wrote a major treatise on the history of fencing. Robert-Merignac became a medal engraver at the Mint in 1903 and received the sculpture prize at the 1911 Salon des Femmes Peintres et Sculpteurs. Specialising in rectangular plaquettes, she produced a number of charming fencing scenes. One, entitled Le Salut Des Armes, shows two foilists performing the Grand Salute with an Angelo-style 18th c. fencer holding a tricorn hat on the reverse [Figs 13 & 14]. Another, entitled La Lecon D’Armes, depicts a master and pupil [Fig. 15].

Fencing medals were not the exclusive preserve of French sculptors. The prolific Belgian medallist Godefroid Devreese (1861-1941), whose portrait of Albert I of Belgium appeared on the 50 centimes coin of 1912, designed a handsome plaquette showing a 16th century swordsman on one side [Fig. 16] and an early 20th century epeeist on the other [Fig. 17]. In the early years of the 20th century, the Swiss medallist Henri Huguenin (1879-1920) produced a profile of a bearded epeeist [Fig. 18] and a design of two epeeists in action, the defender making a vigorous parry of seconde [Fig. 19].

An attractive Art Nouveau medal commissioned by the Epee Club was produced by the Birmingham silversmiths Elkington & Co. It shows the winged figure of Victory holding a laurel wreath over a pair of crossed epees [Fig. 20]. This design is presented at Epee Club events to this day.

In 1925 the first medal to show a woman fencer was made by the Birmingham silversmith William Dingley [Fig. 22] to honour Britain’s Olympic silver medallist of 1924, Gladys Davis.

Three years later Lord Desborough (1855-1945), President of the AFA 1911-26, presented the London Fencing Club with a challenge trophy – an 18-inch high silver statuette by the sculptor and armourer Felix Joubert of the club’s foil coach, Jean-Baptiste Mimiague, to mark his 10 years’ service,. Each year the winner received a 60 mm diameter silver medal [Fig. 23], also made by Joubert.

But Art Nouveau could not capture the driving sense of modernity in post-war Europe, when simple angular and geometric motifs, implying strength and vigour, started to be used on medals. The greatest influential force for stylistic change was the 1925 Exposition International des Arts Décoratifs et Industriels Modernes in Paris, from which the name Art Deco derives. Edouard Chassaing (1895-1974), who was awarded two gold medals at the Expo, designed a striking fencing medal of muscular naked bodies, the obverse showing two male epeeists [Fig. 24] and the reverse a female epeeist [Fig. 25]. Another notable Art Deco medallist was Francois André Clemencin (1878-1950) whose unusual bronze plaquette shows two epeeists at close quarters [Fig.26].

In the late 1920s the AFA introduced a 50 mm diameter medal for championships and honours that was to be the standard fencing award for more than 40 years. It showed the Tudor rose surrounded by laurels with crossed epees inscribed Amateur Fencing Association [Fig. 27], the reverse showing a crossed foil and sabre. But after the second world war the spread of regional competitions created a need for many more awards, leading the AFA to introduce another design in a cheaper metal and only 45 mm in diameter showing two sabreurs in action [Fig. 28], which gradually replaced the earlier medal.

A photograph of British foil champion Emrys Lloyd (left) and Jean Buhan fencing at the 1948 Olympic Games was used by the French medallist Georges Contaux (1891-1984) as the basis for his medal of the two of them in action [Fig. 29].Contaux was a prolific medal maker, producing nearly 900 sports medals over a period of 50 years.

In the mid-1950s Edouard Fraisse joined forces with another French engraver, Henri Demey (1888-1966), to produce a number of sport-themed medals under the name Fraisse Demey. They designed the first medal to show electric fencing [Fig. 30]. By then the golden age of the fencing art medal was drawing to a close.