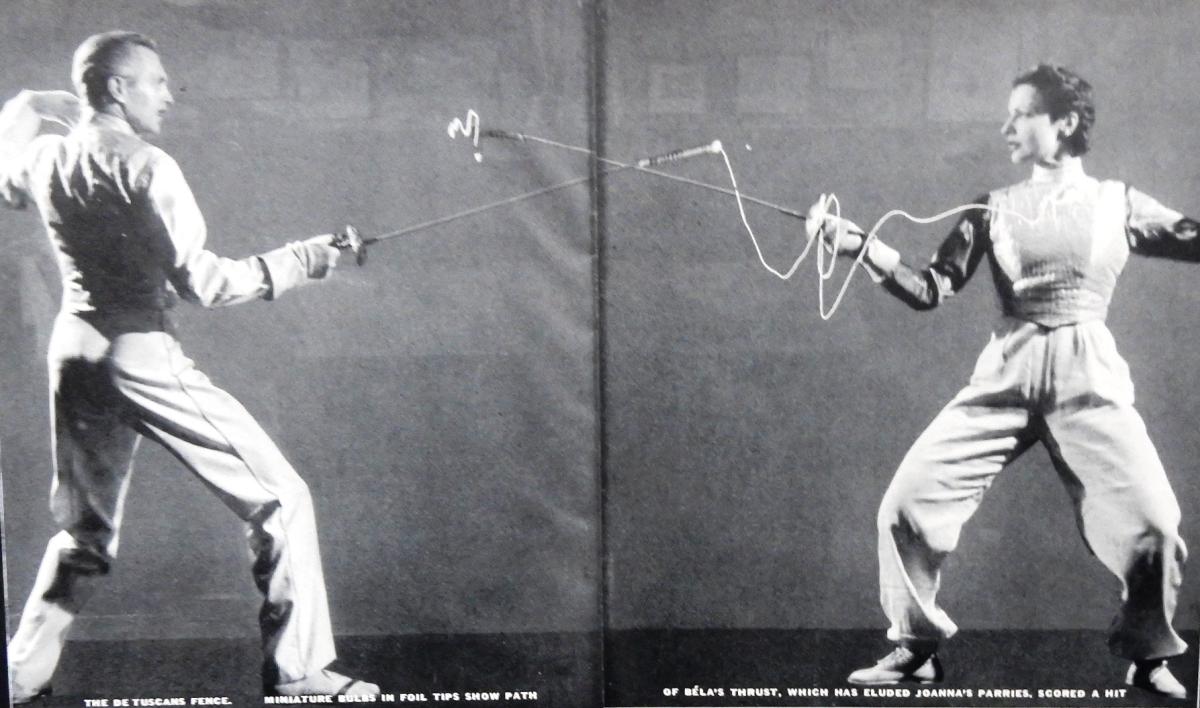 Electrification had the same revolutionary effect on foil technique in the last quarter of the 20th century as the mask had in the first quarter of the 19th. But in 1955, when electric foil was tried for the first time at a world championships, there was little indication of the changes to come. Charles de Beaumont said at the time, “The electric foil worked on the whole very well and did what was required of it – to register hits exactly and impartially. This device at last eliminated the imperfections of the judges, which have been the worst feature of international foil fencing for generations.”

There had been many unsuccessful attempts to ‘eliminate the imperfections of the judges’, starting in the 19th century. Towards the end of his life, the French magician and fencer Robert-Houdin (1805-1871) invented a metallic jacket connected by wires to a battery so that when the metal point of a foil touched the jacket a bell rang. He gave the rights to this invention to the fencing master Augustin Cabot, who registered a patent in 1895. Another electric scoring apparatus had been developed in Belgium in 1885, and in 1896 the English surgeon Muirhead Little invented a similar device involving an electric wire connecting a jacket woven with copper thread to a wall-mounted recorder [Fig. 1]. But, although they were successfully demonstrated, the sight of two fencers moving up and down the piste on wires like a couple of captive beetles caused such hilarity among spectators that the systems lost all credibility.

By 1931 a satisfactory electrical system had been developed for epee – it was introduced at the world championships for the first time in 1933 – but the problem of distinguishing between valid and non-valid hits proved more difficult to solve. Electric jackets were successfully demonstrated at the 1935 world championships in Lausanne, but the foils used were heavy and cumbersome. Two years later the FIE initiated the first men’s foil international electric tournament in Brussels, using an apparatus developed by the Italian engineer Sergio Carmina. Just before the war, a former Hungarian army sabre champion, Bela de Tuscan, demonstrated an ingenious battery-operated system and demonstrated it with his wife Joanna on stage in London. A wire led from a battery inside a transparent bell guard and along a channel cut into the foil blade with the tip of each blade slightly recessed. The fencers wore jackets with the target area covered with a thin layer of metallic cloth. When the blade hit the cloth, a light came on inside the guard to indicate who had scored a hit, but not if the hit was off-target. Another display involved connecting a miniature light bulb to the end of their foils so that, on a darkened stage, they could trace fencing moves [Fig. 2]. But the second world war brought all development to a standstill.

After the war, research started again. By the time of the world championships in 1950, electric foil was sufficiently well advanced for an experimental pool to be run: it was won by René Paul [Fig.3 ]. Finally, in 1954 the FIE gave approval for a full trial of electric foil at the 1955 world championships. Britain's first national coach, Roger Crosnier, was not an enthusiast. “In its present state, the electric foil does not favour technique, but is to the advantage of the unorthodox and forceful fencer”, he wrote in The Sword (Spring 1955). “An American foilist .. summed up the position rather conclusively. He said, ‘It brings fencers like D'Oriola, Rommel and co down to our level. We've a chance of beating them now.’ He has, in fact, formulated the opinion of most foilists, which is that the electric foil will bring fencing technique down to a common lower level. Surely, this in itself should condemn the weapon.”

The blades were about 65 g heavier than non-electric ones and the resulting lack of balance caused many foilists to give up the weapon in disgust. But the best fencers adjusted, as demonstrated by the Frenchman Christian D’Oriola, who won the gold medal at both the non-electric 1952 Olympics in Helsinki and the electric 1956 Melbourne Games. At these latter Games the main problem was with the foil point, which caused a white non-valid light to come on whenever there was the slightest fluctuation in current; the white light registered four times more frequently than the coloured lights for a good hit. Nevertheless, Gillian Sheen [Fig. 4] overcame all obstacles to win Britain's first, and so far only, fencing Olympic gold medal. In those early days, it was felt that referees would be so pressurised that they would not be able to work for more than 15 minutes at a time.

In 1957 the FIE formally adopted the electric foil, but at that year's world championships the apparatus caused considerable problems. Charles de Beaumont noted, “ … a non-valid hit would be shown as a valid hit on both competitors and valid hits were registered on the mask so often that after a time exasperated contestants started to wear ladies’ bathing caps
under their masks to stop their sweaty hair forming electrical contact to the jacket. The new French apparatus was most unsatisfactory and is far less reliable than the British or Italian models.” Allan Jay [Fig. 5] performed a remarkable feat of endurance at these championships, fencing through eight days of foil and epee events during which he had 85 bouts and reached both individual finals, coming third at foil and sixth at epee.

The rotating foil tip underwent significant changes as attempts were made to make it both reliable and effective. The first type, known as the hedgehog, had both horizontal and vertical ridges designed to ensure that it would fix. It certainly did that, but it also tore jackets to pieces. In 1958 a version with the vertical ridges removed was tried, but this was not much kinder to clothing. The Italians produced a flat-tipped model in 1961, but it still had a sharp edge. It was not until 1968 that the bevel-edged tip we know today became the standard shape, although its diameter has changed over the years. [Fig. 6]

Every fencing country has developed its own electrical equipment. As soon as electric foil was introduced, Leon Paul devised a very effective bayonet-type bodywire plug and socket, but most European countries favoured a two-pin connection and eventually in 2015 the FIE adopted this as the international standard, much to the frustration of the UK, USA and Italy which had used bayonet sockets for decades.

In 60 years the scoring apparatus has improved beyond all recognition from boxes with unreliable mechanical relays to today's remote-controlled electronic wonders capable of automatic scoring and time-keeping.

Various non-electric methods of indicating hits have been tried over the centuries. Back in 1687 Sir William Hope in his book The Scots Fencing Master recommended covering the foil tip with sponge and dipping it in vermillion and water so that the judges could see the effect of every thrust. It took 270 years for this system to be improved upon. At the 1955 world championships the Russians demonstrated an invention that, it was claimed, could replace the costly electric foil. It consisted of a hollow spring-loaded point containing a wad of cotton wool that was impregnated with a mix of water, red dye and ammonia before each bout. When a hit was made that caused the point to be depressed, a red mark appeared, disappearing a few seconds later depending on the amount of ammonia in the mixture. But, apart from the inconvenience of having to regularly replenish the mixture, the system did not work on metal and so off-target hits on the wire mesh of the mask did not register. Like other ingenious devices for recording hits developed over the previous 250 years, it passed into oblivion.

Not long after the war, a radio-controlled system made its appearance and experiments with it continued for years, culminating in a serious appraisal by Wilkinson Sword in the early 1980s, but they were thwarted by the problem of interference. It was not until the late 1990s that a Ukrainian company, StM, introduced a system, initially for sabre, that worked reliably. It was used at the world championships for the first time in 2001 and at the Olympics in 2004, before being adapted to epee at the 2007 world championships and finally to foil at the 2008 Olympics. Since then it has been used in the final stages of all major tournaments.
Competitors wear a special conductive T-shirt next to their skin. A hit activates a transmitter attached to the fencer's waist, which triggers a light on the mask and transmits a signal to the scoreboard in the arena. A sophisticated encoding system solves problems of interference from any other transmitter. Fig. 7 shows a bout at the 2019 Tokyo World Cup (photo by Augusto Bizzi).