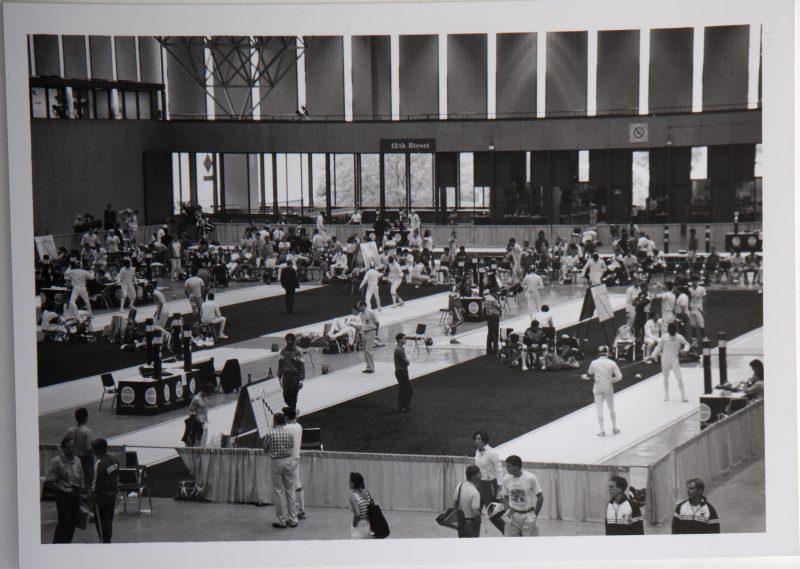 Prior to the 1989 Senior World Championships being held in Chicago, all firms pitching to supply the apparatus for this event were invited to a National circuit competition in Chicago to trial their F.I.E. approved sabre apparatus.

Leon Paul and Allstar apparatuses worked but there was a problem with the market leader Uhlmann apparatus. We were invited to enter a sealed bid for the supply of 30 sets of apparatus, spools, clocks, extension lights with score and finals set up. As we were very keen to showcase our equipment in what we saw as an important world market we decided to offer to supply all the kit free. I was told that when the bids were opened we were the lowest, the next lowest bid was a half price bid by Uhlmann. After a few weeks without any news, I was finally told that they preferred the no cost bid of Uhlmann. (We had been stuffed by the Chicago head organiser who had allowed Uhlmann to rebid).

About 12 weeks before the championships were due to start I was told that the Chicago organisers could not raise the money to fund the event and had dropped out. With only 12 weeks to go Denver fencing region headed by Sam Cheris stepped in and took over the championships. He was somewhat surprised to get a phone call in the middle of the night from me asking/demanding that as it was a new event in a different place there should be a new bid. To our everlasting thanks not only did the organiser have a new bid process but had the faith in us to deliver the required kit. Leon Paul designed tested and made 30 sets of new apparatuses, clocks and extension lights and a new finals extra large extension light and clocks in record time. It's difficult to appreciate the stress involved in making 30 complete new sets and shipping them to Denver just in time. Once at the championships only fencers who have participated at this level can appreciate the tension and excitement of taking part which just adds to the pressure on the kits providers to make sure everything works perfectly on the day.

The set up before the championships went well and the first few days went ahead without any problems apart from a flat battery driving the large clock on the finals piste. Sitting next to our works manager Derrick Cawthorne I noticed one clock running slowly, he suddenly disappeared only for me to see the curtain behind the apparatus on the main raised piste twitch, the apparatus operator suddenly jump as Derrick dived under her table to connect up a new 12 volt battery to the clock, which suddenly leaped into life and caught up with the rest of the clocks. 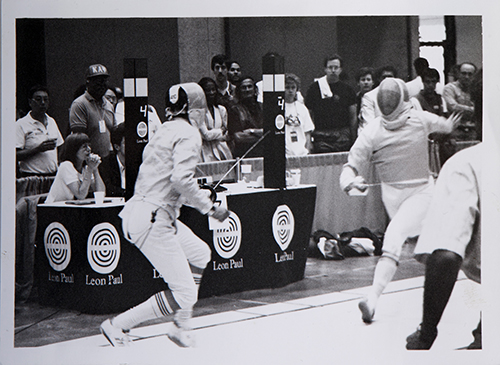 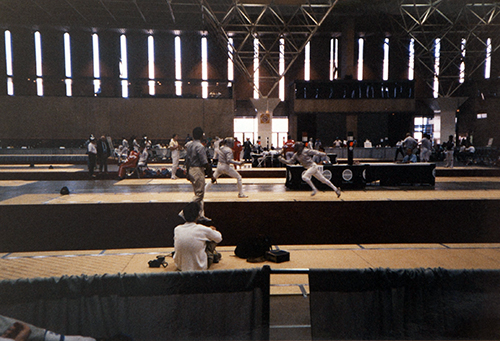 A wider view of the main hall.[/caption]

On the day before the individual sabre started the senior member of the SEMI requested to have the sensor for testing and setting. I queried this explaining that although the SEMI had at some point drawn up a protocol for setting the impact at which the captor should open and therefore allow a hit to be registered, the captors had not be set to this setting at any competition leading up to the championship. It was against general fencing regulations to impose any new technical changes less than a year before a World Championships or Olympic Games. My fear was that as soon as fencing started there would be a riot as the fencers having fenced for a year with one sensor setting found that it had been changed. Even worse they would decide that it was the fault of the Leon Paul apparatus and ruin our reputation, (Imagine what would have happened if foil or epee fencers suddenly were made to start fencing with treble the normal spring pressure?) The SEMI insisted that they set the captors according to their protocol. In the evening we were given the set captors back. I tried the set captors in a sabre and it confirmed my worst fears. Next day half an hour before the event was due to start we gave back the captors to the organisers and SEMI reset to how they had been set for the previous year, telling everyone that if the capteurs were touched and reset Leon Paul and all its staff would leave the building. After short a Mexican standoff between Leon Paul the organising committee and the SEMI the competition was started without the capteurs being touched. The capteurs remained as we had set them and the event proceeded without issues regarding the force required to make a hit. 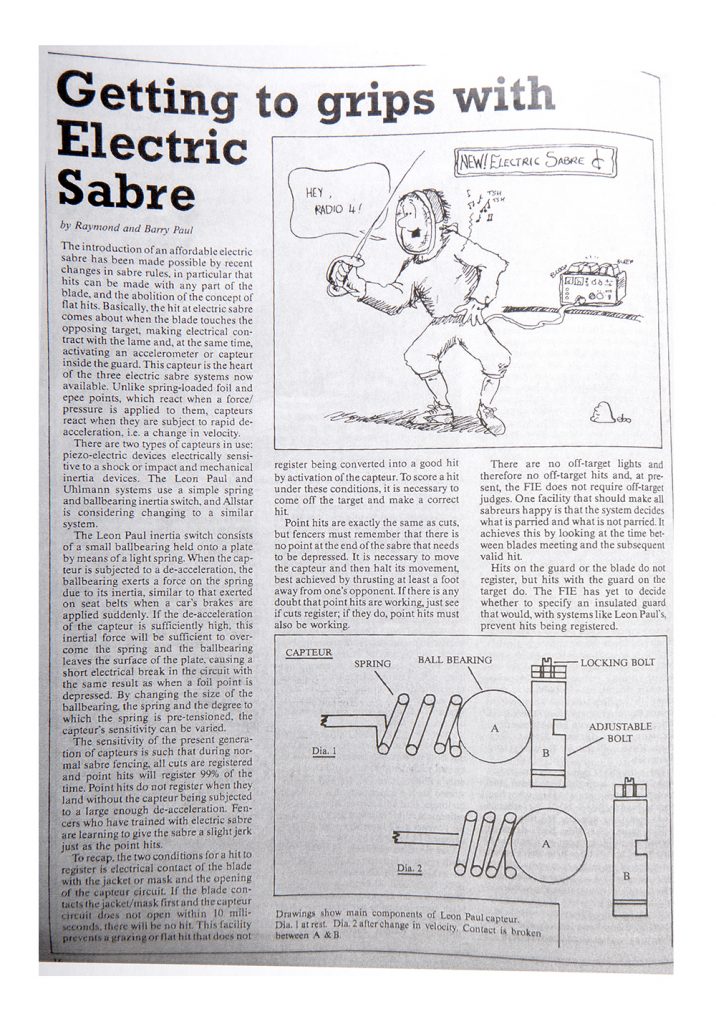 Extract from the winter 1988 edition of the Sword Magazine.[/caption]

Due to the inexperience of the fencers, in some cases this was the first time they had fenced with an electric sabre, there was a huge number of kit related issues which the fencers invariably blamed on faulty apparatus. Fortunately, Derrick Cawthorne was a top world class referee and technician. His knowledge and experience allowing us to run from piste to piste solving issues which were personal kit faults. Anybody following Derrick would have seen a Masterclass in on the piste fault finding. I remember that whereas most piste technicians came on the piste with a kit of tools and devices Derrick had only a three pin socket with line B and C
shorted and a coin to short out the lines. Two issues which I remembered clearly, the first an Asian fencer who was convinced that the apparatus was faulty as it did not register fast hits. He proceeded to demonstrate and indeed it seemed to show that fast hits did not register. This could not be an apparatus fault so the problem must be with the fencer kit. Derrick proceeded to eliminate the spool, his sabre and then found the cut in his bodywire just near the weapon socket. Slow hits worked but fast hits which involved stretching his arm resulted in the body wire cable being stretched and breaking the continuity of the wire preventing a hit registering. The second case was a French fencer who was being difficult to hit, by the time I arrived the spool had been changed and the fencer was demanding that the apparatus be changed. After eliminating everything else it was clear the fault was an intermittent break in the line from his three pin plug to his crocodile clip. Initially, he refused to change his body wire saying it was a new Prieur body wire so it could not be faulty. I convinced the referee I was correct and while the fight resumed with the fencer using his spare body wire I took the plug apart to show a faulty connection (the fixing screw in the three pin plug was missing) 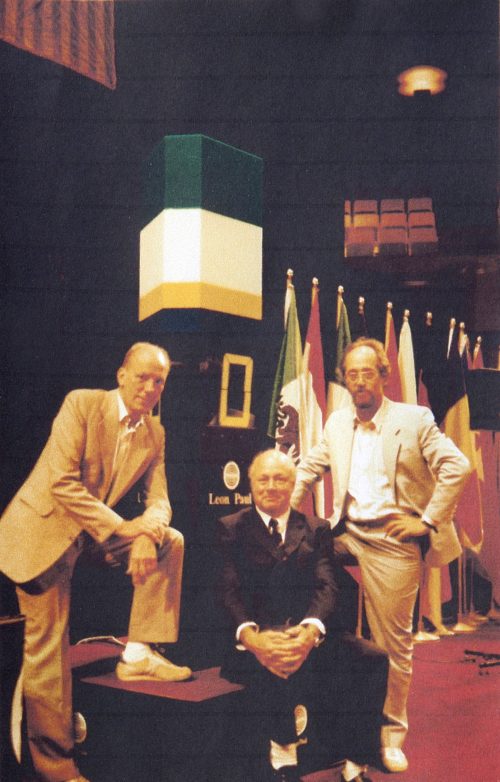 The following year our apparatus was used at the World Championships in Lyon.

To my knowledge, the FIE never followed up the setting of capteurs to any standard in a sensible way, which was a real pity as the capteurs set as per the FIE protocol could have made sabre fencing a better more realistic event ensuring/helping only hits with force would register.